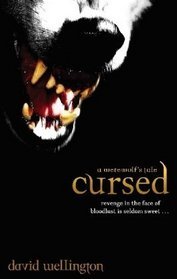 The first book to be reviewed for our Werewolf theme, ‘Cursed: a Werewolf’s Tale’, otherwise known as Frostbite, is an urban fantasy that will blow your mind with panic and horror. A very quick-paced novel with plenty of action that the reader will read in no time at all. David Wellington surely knows how to scare the pants off you and yet allow you to completely endure the ferocious attacks and animalistic behaviour no matter how chilling and raw!!!

The story begins with Cheyenne Clark lost, hungry, cold and lonely in the Arctic amid the trees and snow. Before too long she is being tracked by a pack of wolves. Knowing that she couldn’t possibly run from them, and with very little energy, her only chance is to climb a tree high enough so that the pack can’t reach her. However, when howling of another is heard nearby the pack of timber wolves below Cheyenne’s feet soon flee, leaving her sitting on a branch of the tree. Moments later Cheyenne meets with the wolf whose howling she heard. Much larger than the timber wolves and much more ferocious this one tries to reach Cheyenne, jumping at her, lashing at her with large paws. Until he reaches her ankle and manages to claw into her flesh!

Although the beast couldn’t quite attack Cheyenne completely, enough damage was done to make Cheyenne’s world come crashing down. She would never be the same again. She was a werewolf, a monster, a Lycanthrope. There are many names for these species and now she herself carried the curse! For every time the moon rises, Cheyenne would transform, having to learn a different way to survive and avoiding the one element that could kill her: silver, silver, silver!

Loneliness is not natural for a wolf as they tend to live and move around in packs. As a new lone wolf, Cheyenne could really do with a companion. This proves to be just as difficult as trying to deal with her new ‘self’ as the only one who could truly understand is the one that tried to kill her. Now a wolf, Cheyenne not only needs to worry about being the victim, the prey, but also has to live with being a hunter. Will she kill the one that cursed her? Will he return to kill her?

Cheyenne’s character is written with a great deal of contrast from how she feels and thinks as a human and how she is in her wolf state. The natural animalistic behaviour takes over when she is transformed, her sense of smell and hearing is much greater than her sight. As a wolf she doesn’t reason, she doesn’t use logic she survives the only way she can. Back in human form, Cheyenne wakes frozen, naked and never fully aware of what her wolf has done.

Without trying to spoil the story one of my favourite areas of the novel was when the reader begins to understand the man of the wolf that attacked Cheyenne, Powell. The reader is educated in Powell’s history as a man and how the curse affected him and we also learn a little of werewolf mythology! I found this to be very interesting and exciting but cannot elaborate more than that. This novel simply needs to be read without much explanation beforehand. It truly does speak for itself!

On a different note, David Wellington has written the setting of the scenes beautifully as one can imagine the freezing cold of the Arctic wind, the icy water of the small streams and lakes, all silent and remote from most civilisation with only the sun or moonlight to estimate time. Although not a novel of romance it most certainly is a novel of survival! But can one survive alone? Would one want to survive alone? Or is their only option to try and kill the other to eliminate a dangerous threat?

‘Cursed: A Werewolf’s Tale’ is an absolutely fascinating read. For more fur, fangs and fear I am hoping to read the sequel, ‘Ravaged’, otherwise known as ‘Overwinter’, very soon!