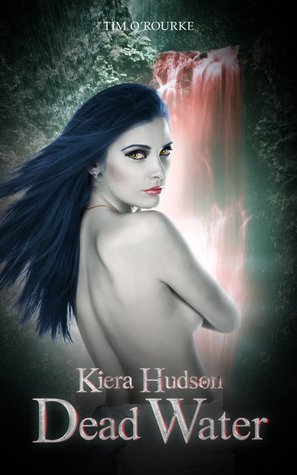 It is such a treat to read a Tim O’Rourke story. As it has been a few months since I have read Dead Wolf (Keira Hudson Series 2 Book 5), I was beginning to think I’d forget where I left off! Oh no, not with Tim. His writing allows for the reader to easily carry on the Keira journey, with reminders throughout where the story has been to. Therefore also allowing a fresh reader to the series to settle into the story. With Vampyrus, Lycanthrope, Skin-Walkers and more, this paranormal series will grip you like no other!

Dead Water largely follows half-breed Keira and Vampyrus Potter and Murphy travel to the Dead Water, in search of their friends, Kayla and Sam. During their journey, in the ‘pushed’ world they have found themselves in, they are gradually turning into statues, cracking and slowly turning to dust. However, during moments of ingesting a little blood they are able to keep going until they reach their destination. Upon finding it a little too easy to have reached their destination, Keira fears that not all is as it seems!

After reading the subsequent novel, fans of the series are absolutely desperate to know how Keira and Potter’s relationship will fare. In Dead Water we follow the story from Keira’s and Potter’s points of view. It is more than fair to say that at the beginning of Dead Water Keira is quite hurt and upset. After finding out who she really is, and that her lover and friend, Potter and Murphy, have been lying to her she doesn’t really have much to say to them. Potter, in particular, has a hard time from Keira especially as Keira feels betrayed by him in more ways than one. Unfortunately for Potter, Keira doesn’t want to hear that he was only trying to protect her and spare her feelings. She can’t possibly give in to him as she knows she would only get hurt again.

Poor Potter was actually betrayed himself, with the idea of upsetting and manipulating Keira. It is so clear why fans of this series love Potter. His feelings are so strong but not always transparent to Keira. However, reading his point of view the reader does understand him and the reader wants to pull Keira aside to explain this to her. There have been moments when Potter has been a little too trusting of others, especially of the female kind, and has ended up in some messy situations!

Even though there are some pretty intense moments between Potter and Keira, on the other hand there are some really great scenes with Potter and Murphy. In regards to Keira, Murphy is a little overbearing in an observant and protective manner. However, some of Murphy’s remarks to Potter about her are obvious, annoying or over the top. It’s almost like Murphy is trying to get a rise out of Potter. To which Potter replies brilliantly in his sarcastic manner which made me laugh out loud at times. This provided a great relief in between the overall tense feeling.

I also thought it was fantastic to read about Keira using her investigative skills, trying to find Kayla and Sam, as she returns to the snow-covered field where they had been involved with a wolf attack with Potter and Murphy in Chapter 4. (This is where many of Potter’s sarcasm comes to the fore with Murphy!) This scene, as well as how Keira carefully works out what has happened as she illuminates certain possibilities, really took me down memory lane to the first instalment of Keira when she first visited the Ragged Cove and met Potter and Murphy in Vampire Shift! Here Keira was taken to her first scene where a body was found just within the tree-line of a field and Keira used her ‘seeing’ abilities to spot the smallest of details! This scene is very fresh in my mind, especially after having read the Graphic Novel of Vampire Shift a few weeks ago.

The excitement grows with each chapter. There is a great use of dialogue, as in many of Tim’s books. This makes it a fun and quick read, even though the plot itself is very rich in intensity and depth. The scenery changes so much, along with the weather conditions, as the story moves on. This again is typical of Tim O’Rourke, especially in the Keira Hudson series. We begin with snow, fields, the blood red Dead Water, the upward current of the Fountain of Souls, forestry and the town of Wasp Water. You can also gauge from some of these names that Tim’s imagination takes you to a completely different ‘pushed’ world of your own as the stories remain alive and strangely real. It is also regular for Tim to introduce new characters and in this instance it comes in the form of statues, which have strangely been following Keira and her friends to the Dead Water.

The ending of this one will certainly shock many fans. On the one hand I am thinking, ‘Tim, what have you done!?’, and on the other I am quite excited of the possibilities that it could bring. I do have my own theories so I hope I am right. I personally believe that if an author does surprise you, even in a negative manner, that it is a work of brilliance. These days I don’t think it takes much to shock people, especially open-minded people. And I also like an author that isn’t too predictable!

The following instalment, ‘Dead Push’ is available now and I will hopefully be reviewing it very soon. In the meantime, come and check it out on Amazon US and Amazon UK.

Please check out all of our Tim O’Rourke reviews (below).