COMPETITION NOW CLOSED. THANK YOU ALL WHO ENTERED!

To celebrate the release of author Tim O’Rourke’s first publication, Vampire Seeker (Samantha Carter #1), by major publishing house Piatkus/Little Brown on THURSDAY 16TH JANUARY 2014 we are hosting a GIVEAWAY for one lucky winner to receive a signed paperback copy of this brilliant story. (Please check out book blurb and our review below.)

To win a copy all you have to do is add your name below in the comments box, or visit us on Facebook and add your name there. Closing date is Thursday 23rd January 2014 and the winner will be randomly selected thereafter! Good luck, guys! 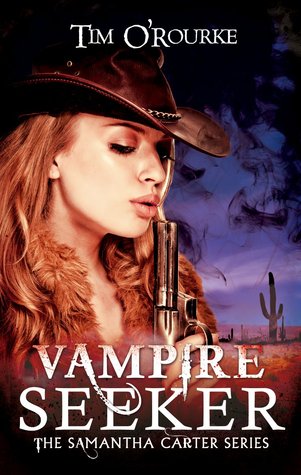 Book Blurb: Samantha Carter believes that a vampire is responsible for the brutal deaths of four women in Whitechapel, London, England. Each murder is identical to those committed a hundred years before by a very different serial killer.

Desperate to prove the killer’s identity, Samantha follows him onto a late night tube train. But Samantha doesn’t reach the next station and finds herself on a very different journey, where she discovers vampires are very real and far more dangerous than she had ever imagined. To stay alive, Samantha needs to figure out why things have gone so terribly wrong for her – and more importantly, why she is out of time?

‘Vampire Seeker’ is Book One in the Samantha Carter Series.

I thought Tim O’Rourke had me with the Keira Hudson series. I thought the same again when I read ‘Moonlight’, from his Moon Trilogy, and then in his latest series, Sydney Hart, in the novel ‘Witch’. ‘Vampire Seeker’ is no exception to the rule. It’s wacky, adventurous, action-packed, fun and gory. From a vampire seeker in London, 2012, to a cowgirl in the Wild West in 1888, Samantha Carter is a brilliant heroine.

‘Vampire Seeker’ begins with Samantha following a Jack the Ripper copy-cat killer in London 2012. Samantha believes that the killer is a vampire and, as she has had an obsession in trying to prove their very existence, when she hears of the latest murder via a police scanner she exploits the situation by tracking him down. This is a very brave and courageous move, and even though risky, Sammy is on a mission for what she believes in. She is studying criminology but reading about, researching and studying vampires is her thing. She cannot let this moment pass. She is so close to the truth.

With the police on her tail, as she is seen near the crime scene, she follows the stranger she believes a vampire and murderer as quickly and quietly as she can. She ends up at a Tube station and boarding a train she sees the stranger take. With only moments before the police reach her she pushes her way through the carriages to find her ‘vampire’. Throughout the following pages words are exchanged and then there is a bright light….

….when she wakes, Sammy is in the Wild West in 1888. She is dressed in denim and can handle a gun or two very well. She is in a tricky situation as soon as she wakes, with a gang of men lying around her that she has supposedly killed and another man behaving in a threatening manner towards her who has disarmed her and ready to take advantage. It is at this point that Samantha meets the Preacher, Louise, Zoe and Harry, a group of possible outlaws that treat Samantha as if she were one of their own.

To elaborate any further would completely spoil the story, however Samantha needs to work out how she arrived in the Wild West in 1888, why she woke up there and how she can get back to London, 2012. Is it connected to the murders taking place, or the possible vampire she had followed? Or is it all a dream?

Sammy’s character is very strong. She is a decisive gal with ambition and courage. She handles herself well in most situations and stands up to the other characters in the novel. Although she isn’t easily pushed around or deceived easily she still retains her femininity and sexiness. Samantha is wise and is able to pick up skills very quickly, despite having to get used to a new way of life.

Throughout ‘Vampire Seeker’ there are many action scenes that are quick-paced, violent, gory and sickening. This all adds to the thrill and excitement and the pace of the novel. Tim’s writing is so clear to the reader that although you are using your own imagination, the details of these action sequences are still vivid and clear from the writing. Every movement made can be imagined easily, allowing the reader to live in the moment themselves.

With Tim’s books that I have read thus far I have felt alive when reading them, as if beside the characters, like I am there with them. With ‘Vampire Seeker’ I felt most of this, however I not only wanted to be there with Samantha but I wanted to be Samantha Carter. I wanted to know how it would feel to shoot pistols and ride a horse in denims, belonging to a group of possible outlaws. Would I want to stay in the Wild West, 1888, or return to London in 2012?

‘Vampire Seeker’ not only makes for such a great read, but it captivates the imagination so much that you can see it, you can feel it. I was taken on a roller-coaster ride of fantasy every few pages where one minute it is like the TV series ‘Life on Mars’, the next ‘Back to the Future Part III’. The only difference being that here we have a female lead character. I have been watching a few westerns on TV recently, such as ‘Deadwood’ and ‘Hell on Wheels’, and reading Vampire Seeker simply tied in with this theme with the added bonus of the faster, more adventurous pace, along with the paranormal direction. There are also so many twists and turns that one direction that the novel took made me think of the movie ‘From Dusk ’til Dawn’ but I will not elaborate too much here, other than to say that a relationship between certain characters have similar circumstances.

The Preacher character is almost like a father-figure type character in my mind. He is out on a mission himself with his fellow riders and he is a leader. Samantha is helped by the Preacher and although he, Zoe and Louise have been friendly and accepting of Samantha, taking her in as one of their own, Sammy has her doubts about the group as the story unfolds and questions the Faith of the Preacher.

And then there is Harry, Harry Turner. I can definitely see why this novel is for new/young adults, 17 yrs plus, as the sexual tension is very hot and intense. If you are looking for a romance theme, or at least the hope of one with a strong and silent type cowboy you will not be disappointed. He is like Clint Eastwood in ‘High Plains Drifter’, which funnily enough has an almost paranormal feel but not in quite the same way that ‘Vampire Seeker’ has. Aside from Samantha, Harry is my favourite character that I cannot live without. I am just dying to know just how bad he is. I can honestly say that if the action and gore don’t get the blood pumping, Harry certainly will!

I need to read the sequel right now. I cannot wait for the release date!

‘Vampire Seeker (Samantha Carter, Book One)’ was received gratefully from the author in return for an honest and fair review.

Check out the Amazon UK and Amazon US links!

Don’t forget to add your name below for a chance to win a SIGNED Paperback!!! Good luck 🙂

P.S. You can always check out our reviews of some of Tim’s other works here!