Swashbuckling Adventure and Romance on the High Seas

Having read the first two novels in Regan Walker’s Agents of the Crown Trilogy, Racing with the Wind and Against the Wind (scroll down for links to my reviews), I was thrilled to once again have the chance to read and review this author’s work. Wind Raven, the third book in the series, is a fast-paced, swashbuckling romance. Although set in the Regency period, most of the action takes place on board ship and in the Caribbean, far away from the ballrooms and house parties held by the English aristocracy. Scroll on down for the book blurb and my review and links to enable you to connect with Regan Walker, an author who is going from strength to strength with her historical romances. 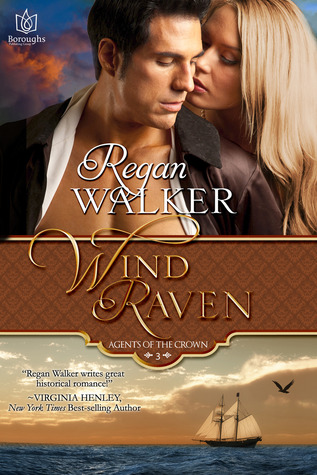 Wind Raven is a super read from start to finish, combining rip-roaring adventure and romance, with an elements of danger and suspense. The pairing of the English Captain Nick, on a secret mission for the Regent, and the unorthodox and headstrong American Tara McConnell, provides the perfect ingredients for a memorable romp on the high seas.

The swoon worthy Captain Nick, the Raven to his crew, is dedicated to life at sea. Although women certainly have their uses to him, as he is no monk, he will give his heart to no woman, due to deceit in the past. He dislikes females on board ship even as passengers and he is wary of American women in particular. However, social obligation gives him no option but to agree to accept Tara as his passenger, despite his mission for the Regent.

Tara is feisty heroine, more at home on board ship than in the ballroom, due to working alongside her father and brothers on their clippers for much of her life. She has not forgiven the English for the loss of one of her brothers at sea during a battle in the recent hostilities between her homeland and England. She refuses to stay in her cabin whilst aboard ship and wants to play an active role alongside the crew of the Wind Raven, a crew who soon adopt her as one of their own.

I adored the many scenes between Nick and Tara as she tries to carve out a role for herself aboard ship as he tries to control her and persuade her otherwise. I also loved how Nick is beguiled by her mixture of innocence, passion and unconventionality that completely foxes him and compels him to re-examine his long-held convictions and open his heart to love. It is clear early on that not only sparks will fly but also that passion will ignite between this couple, who are so well matched, if only they could see it. Although Nick is a gentleman and initially resolves not to act on his attraction to Tara, as the weeks pass and life aboard ship throws them in close proximity together, the inevitable happens. Yet as they get ever closer to Tara’s home in Baltimore what future is there for this couple who are often at loggerheads, despite their attraction, and whose lives seem so far apart? In addition, will they survive the danger that the Regent’s mission has put them in as the pirate Corfesi is a worthy adversary and no fool.

Regan Walker’s writing is not only sublime, but her characters are complex and believable and the research that she has carried out into life aboard ship and into the social life and politics of the era adds depth and interest to the narrative. I once again enjoyed how the author included real historical figures in the story, which is one of her trademarks. Wind Raven is a real page turner and a super addition to the first two books in The Agents of the Crown Trilogy. I recommend it to readers of historical romances who like strong and unconventional heroes and heroines in a plot full of adventure and intrigue.

This book was given to me by the author for the purpose of an honest and fair review.

Click here for my reviews of Racing with the and and Against the Wind, the first two books in the trilogy.

3 thoughts on “Wind Raven, #3 in The Agents of the Crown Trilogy, by Regan Walker”