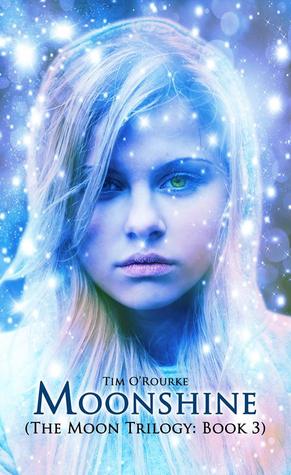 Weak and still not yet a true vampire, Winnie McCall heads north toward Scotland in the company of the last of the werewolves, Thaddeus Blake. Hunted relentlessly by two police officers, Thaddeus and Winnie must find the Moonshine, a prism that when matched with the Moonbeam, will destroy the vampires.

When two ancient enemies go head to head, the body count soon starts to rise, but who is it leaving a trail of dead bodies along the path that Thaddeus and Winnie are taking? And what is the terrible secret from Winnie’s past that is preventing her friend Ruby Little from staying dead?

With terrifying consequences, Winnie discovers how far she and the man she loves, Thaddeus Blake, will go to survive and remain the last of their species.

A shock ending that will leave you stunned, ‘Moonshine’ is the final book in ‘The Moon Trilogy’ by bestselling author, Tim O’Rourke.

Another action-packed adventure of paranormal horror and drama from Tim O’Rourke, with many twists and turns, especially as the ending nears. You will be blown away with this ending and the many surprises that the author reveals. Two questions many of you will be asking are, ‘Can there ever be a truce between vampires and werewolves?’ and ‘Will Thad and Winnie’s love be enough to hold everything together?’

Winnie is slowly turning into a vampire, whilst Thad is the last of the werewolves. Being hunted down by his last love’s vampire father, Thad has to keep going to prevent the end for all werewolves. After Winnie has been bitten by a vampire, and turning into one herself, these two are very unlikely characters to unite and work together. Yet Winnie’s love for Thad keeps her doing just that! For the very first time in Winnie’s life she feels the love and the freedom she thought she would never have. Thad has given her so much, despite his early intentions. The bond they have is strong and the reader feels that anything is possible as long as these characters are together.

Not only do they share their love for each other, but they both need each other to survive. During full moons, Thad needs Winnie to ensure he doesn’t harm anyone in his wolf form. He needs to be caged somewhere and watched until he returns to his more human state. Meanwhile, as Winnie is becoming more vampire-like, she also has the need and thirst for blood. She needs Thad to help her through her thirsts. They need to ensure their safety from each other as well as the safety for humans to prevent either of them being harmed and to prevent the truth from coming out.

“She would have to look after him as much as he would have to take care of her. They needed each other. Thaddeus, therefore, knew in his heart that he couldn’t leave Winnie behind, even if he wanted to – because without her at his side, he risked dying as much as she. Whether she held him back or not, they were now forever linked – held together that shrouded the world he lived in.”

The plan for Thaddeus is to travel to Scotland where he can threaten to destroy all vampires if he connects the Moonbeam with the Moonshine. As a result of this connection, all vampires will cease to exist. With Winnie turning, Thaddeus is hoping that the vampires are willing to see reason and once they are aware of the true love that exists between Thad and Winnie then perhaps a truce can be made. To make matters worse, there is a trail of dead bodies that are following Thad and Winnie and the local police are following them. The police are not all they seem to be as readers may be aware from Moonbeam (The Moon Trilogy, #2), and with vampires hunting them down Thad and Winnie do not have a great chance.

As well as the action, the chase, the attacks and the sheer desperation that Thad has, another element of Moonshine is the more spooky and eerie side, where the reader is given a much more detailed account of Ruby Little. Ruby Little was Winnie’s best friend from when they were younger and then living on the streets together. After Ruby’s death, Winnie began hearing her voice and seeing her. She has provided Winnie with advice and warnings. Still looking out for her friend from the other side. Some of these scenes are spooky and become more gory and horrific, especially as the trilogy has come on and the reader can envisage a Little Red Riding Hood character, back from the dead, but with maggots where her face should be. It is sad, especially for Winnie, and it is also horrifying and scary.

Moonshine is broken down into three sections: Thad and Winnie; Winnie and Ruby; and Winnie. Although I loved all three sections, I thought the flashbacks of Winnie’s history with her friend, Ruby Little, really stood out. This is partly due to the tragedy of Ruby’s life, the horrors that she endured. The whole atmosphere of this section is both dark and light as the reader begins to understand exactly what Ruby has gone through and her strength to cope with it and yet she also forms a special bond with Winnie that perhaps would never have been created if it wasn’t for the dark occurences. I feel that this type of scene is a new avenue for Tim O’Rourke and he has captured the hearts and minds of the reader magically. It is also extremely heart-warming when we discover how Ruby is protective of Winnie and she goes to great lengths, without really explaining an awful lot to Winnie to begin with. This is a friendship like no other and even after death, Ruby still looks out for her friend.

During the last chapters the tempo builds up again as the ending comes to a close. The rollercoaster of the series is set to turbo boost as the reader is thrown from one possible ending to another. The reader feels as desperate as Thad and Winnie as the heartbeat quickens from fight scenes to chases, from the uncertainty and the horror. This finale will leave the readers a little gobsmacked and torn between what has happened and maybe what they thought would happen. I love it when an author can completely baffle the reader and that’s what Tim O’Rourke has done.

The Moon Trilogy would be fantastic to read one book after the other, as one complete novel, as the reader is left on tenterhooks with the first two books. The pace is also very fast and full of action that you simply don’t want to stop reading. I would certainly love to see this series in a box set, but for now all three books are available for very affordable prices. (Currently Moonlight, The Moon Trilogy #1, is available for £0.77 at Amazon UK and $1.24 Amazon US. Please note that prices are subject to change.)

A copy of Moonshine (The Moon Trilogy #3) was provided by the author for the purpose of an honest and fair review.

You can purchase Moonshine (The Moon Trilogy #3) at Amazon UK and Amazon US.

Review for Moonlight (The Moon Trilogy #1)

Review for Moonbeam (The Moon Trilogy #2)