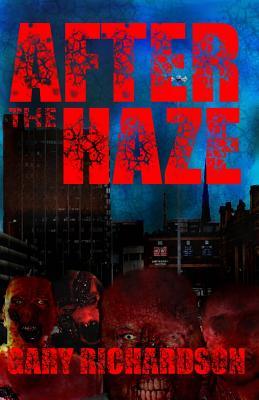 We are excited to post zombie horror, After the Haze, for a gritty, scary and suspenseful Halloween treat. Not only that but we have 2 SIGNED copies to giveaway to some lucky winners! All you need to do is add your name in the comments below or on our Facebook Page, and we will randomly select the winners on Friday 7th November 2014! Tina & Caroline 🙂

Synopsis: The haze ravaged everything. Human life as we know it is over. Those who survived the haze awoke to find themselves in a new nightmare, as the dead returned with the insatiable desire to hunt down and feed on the remaining humans. Yvonne thought she had escaped her nightmare. Safely aboard the HMS Lancaster, Martin, Mike and herself believed they had found salvation with their military saviours. Things change when a devastating realisation is made. Humans no longer control the Earth. With this in mind, Yvonne has no choice but to assist in the operation to take back control of the UK and bring together all the survivors, but she soon learns that there are bigger threats to mankind than the living dead…

After reading the first book, The Purple Haze, I couldn’t wait to read After the Haze. Whereas the first book takes the reader from a bank robbery scene (put me in the mind of tv series, The Sweeney) to an escape scene, where the living had to constantly duck and dive from the undead and begin to leave loved ones behind and use violence to survive, the sequel begins once the initial haze has started to diminish and many are dead or undead!

The opening chapter is fantastic. The reader is introduced to Alan who is spending quality time with his son, daughter-in-law and granddaughter at his home. Everything appears normal, until the Purple Haze hits. Once Alan comes round it isn’t long until he realises he needs to protect his granddaughter. The journey that he has is so heart-breaking. This opening is easy to relate to and yet builds up for the horror to come – if you have already read The Purple Haze you will prepare yourselves a little easier. This is certainly not for the faint-hearted with some shocking moments and great horror. Fans of The Walking Dead will definitely love this series.

If you haven’t read The Purple Haze – no problem – as Gary Richardson has written the introduction to the main characters, Mike, Martin and Yvonne, from where they left off in the last story. Richardson also delves into some scenes from the first story which either recaps the reader, or informs the new reader just where these characters have come from and what they have been through. In this manner, After the Haze could be read as a stand alone. However, I would STRONGLY recommend that The Purple Haze be read first for the reader to feel the full effect of the beginning of the horror!

The story follows Yvonne’s character mostly, as she is faced with venturing back to the mainland where she had left the mayhem and horror behind. Seeing the undead brings the fear, tension and panic back. Albeit, at least this time she has trained marines to help protect her. The reader can really understand Yvonne’s reluctance to face these monsters again – she’s been through it once and survived. This must truly be a psychological challenge for her. And, although the marines accompanying her are equipped and trained they have not faced the zombies themselves. You can imagine the shock and surprise that they feel when they do.

The mission is to check three villages and ascertain any survivors in order to create some areas human zones, if possible. The idea is that these human zones could be set up to help keep the survivors and human race alive, with the hope to repopulate the area, country and possibly the world, depending on the situation. There are moments of quiet, eeriness and some action during the initial searches and these help build up suspense for what is to come a little later on!

When the team come face to face with the zombies there is plenty of action, violence and gore. Some scenes are quite horrific physically and painful emotionally as some of the undead are familiar to their killer. It is gritty, dark and the reader will be quite tense and stunned at times with some of the surprises that are waiting!

Another side to After the Haze explores how some survivors can become cruel, evil and wickedly selfish. They want to take what they want, at the same time as try to instil control and fear over the remaining survivors. The readers will certainly have a level of threat and violence to deal with, aside from the undead themselves! This makes some characters those that you love to hate and you long for them to receive a little of what they are dishing out. There is the need for justice and maybe revenge, which makes for a deeper storyline.

The ending is wrapped up beautifully, providing the reader (or at least myself) with an obvious hero and favourite character of the story. If you love zombie stories, horror, violence, survival stories, and even emotional ties, then After the Haze will prove to be a favourite!

After the Haze by Gary Richardson is available at Amazon UK and Amazon US. But don’t forget to enter our GIVEAWAY for the chance to win one of two signed copies! Add your name in the comments box below or on our Facebook page. CLOSING DATE: FRIDAY 7TH NOVEMBER 2014!