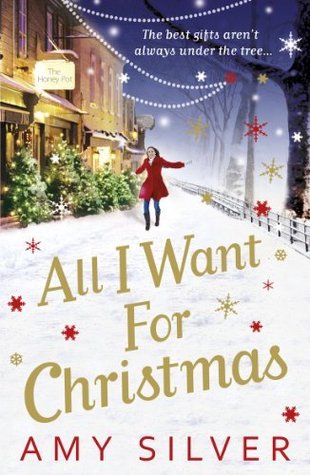 Title: All I Want for Christmas

Blurb: It’s Bea’s first Christmas with her baby son, and this year she’s determined to do everything right. But there is still so much to do: the Christmas menu needs refining; her café, The Honey Pot, needs decorating; and she’s invited the whole neighbourhood to a party on Christmas Day. She really doesn’t have time to get involved in two new people’s lives, let alone fall in love…

When Olivia gets knocked over in the street, however, Bea can’t help bringing her into The Honey Pot and getting to know her. Olivia’s life is even more hectic than her own, and with her fiancé’s entire family over from Ireland for Christmas, she shouldn’t be lingering in the cosy warmth of Bea’s café. Chloe, on the other hand, has nowhere else to go. Her affair with a married man has alienated her friends, and left her lonelier than ever.

But Christmas is a magical time, and in the fragrant atmosphere of The Honey Pot, anything can happen: new friends can be made, hearts can heal, and romance can finally blossom…

This is a fab read for this time of year, not only due to the heart-warming and romantic storyline but also because of the layout, with each chapter being a date in December, beginning on the fourteenth and leading up to the big day!

It is written from Bea, Olivia and Chloe’s points of view and follows them through different times each day which really opens the characters up for the reader to get to know and enjoy.

For Bea, she wants to have her first Christmas with her young son. She has been through so much and deserves a fantastic year. After losing her husband two years before, she is now running the café, the Honey Pot, that her and her husband had started together. The previous year was quite a low point for Bea as she sunk into depression and drink, with her mother looking after her son. Which is why this year is so special. As well as this, Bea wants to hold a Christmas party at the Honey Pot on Christmas evening for the people of the neighbourhood, friends and for the lonely to have somewhere to go.

We meet Olivia early on in the story when she gets knocked over outside the café and Bea goes out to assist, bringing Olivia into the Honey Pot and having a chat over a nice, hot drink. This is really the beginning of a great friendship between these two characters. I feel that the author has taken great care with her writing to build these characters up and create a closeness between them. It is written well and is a flowing read which is easy to follow.

Olivia is about to get married to her boyfriend, Kieran. However, when his family comes over from Ireland in the run up to Christmas, she finds that she is having a stressful time feeding and entertaining them, as well as working. Not only this but when Kieran’s family begin suggesting wedding ideas and their future together, i.e. kids, when to have them and how many, Olivia begins to get a little cold feet and doubts whether she is doing the right thing. And, has she really slept with enough men yet?

It is a demanding time for her and she just wants things to remain the same for Kieran and herself. If she pleases him and his family her wishes will never be met. Plus, she knows she will never go through the getting-to-know-you stage again and is this just all too much to bear?

Meanwhile, one of Bea’s best friends, Sam, begins to really get to her. Sam has always been popular with the ladies and it isn’t unusual for him to have a new girl on his arm every week or so. Bea doesn’t really know why he is bothering her so much. They have always been close – only being next door he has looked after Luca, her son, and been there to talk to, lend things to, etc. And she has always known he was one for the ladies. But, Sam seems to be turning up recently when she’s in the middle of something, he seems to be getting closer to her and he gets under her skin at times.

It becomes apparent that Sam has feelings for Bea. This creates a brilliant will-they-won’t-they storyline. Bea knows that Sam has always been there for her, but does she feel that strong about him? And even if she does, she cannot betray her husband, Marco.

And then there’s Chloe. Chloe is introduced as a cold and rude character, having an affair with a married man and not really having much thought for anyone else. When it is first realised by Olivia and Bea that Chloe is in a relationship with a married man, they react quite judgemental towards her, which in turn brushes her up the wrong way. She retaliates by speaking harshly to Bea about her husband, as she sees Bea as the married man’s wife. However, she really doesn’t know Bea’s truth and has judged her completely wrong. But, despite this shaky start, is it possible for a friendship to blossom?

Surprisingly, Chloe was a character I really enjoyed. Even though she has been involved with a married man and comes across quite cold and haughty to begin with, I felt her character made the longest journey and she really is quite nice underneath it all. She seems to come to her senses and realise just how lonely she really is. She doesn’t fit in with her family and excludes herself to an extent from their visits as she is her own person really. I really admire this about her, as it does take strength to go your own way especially when you know it will be a lonely venture.

All I Want for Christmas is available at Amazon UK and Amazon US.