We are delighted to be working with Catherine McKenzie this year, Canadian author of Spin and Spun (novella sequel to full novel, Spin) – both of which are on my review list, as well as her Forgotten, and due for release on February 1st, Arranged,  which is to be reviewed by Tina. These contemporary romance/chick-lit novels have been translated into French, Portuguese, and several other languages, and are international bestsellers, as well as being freshly released in the UK!

Please find below information for Forgotten and Arranged, with links for further details, and a short bio on the author.

When everyone thinks you’re dead, how do you start your life over again?

Emma Tupper, a young lawyer with a bright future, sets out on a journey after her mother’s death: to Africa, a place her mother always wanted to visit. But her mother’s dying gift has unexpected consequences. Emma falls ill during the trip and is just recovering when a massive earthquake hits, turning her one-month vacation into a six-month ordeal.

When Emma returns home, she’s shocked to find that her friends and colleagues believed she was dead, that her apartment has been rented to a stranger and that her life has gone on without her. Can Emma pick up where she left off? Should she? As Emma struggles to recreate her old life, everyone around her thinks she should change: her job, her relationships, and even herself. But does she really want to sacrifice everything she’s working so hard to gain?

“McKenzie has created a charming character in Emma, witty, extraordinarily level-headed, and blessed with grace under fire in the most trying of circumstances. Forgotten is the story of one young women’s life, broken down, reconstructed, and forever altered. It is an endearing story of discovery and transformation and the importance of turning lemons into lemonade.”— BOOKLIST

For more info on Forgotten please check out the following links: 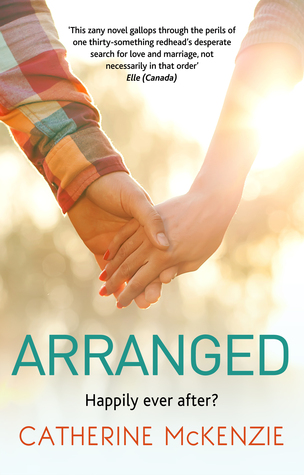 Anne Blythe has a great life: a good job, good friends, and a potential book deal for her first novel. When it comes to finding someone to share it with, however, she just can’t seem to get it right.

After yet another relationship ends, Anne comes across a business card for what she thinks is a dating service, and she pockets it just in case. When her best friend, Sarah, announces she’s engaged, Anne can’t help feeling envious. On an impulse, she decides to give the service a try because maybe she could use a little assistance in finding the right man. But Anne soon discovers the company isn’t a dating service; it’s an exclusive, and pricey, arranged marriage service. She initially rejects the idea, but the more she thinks about it-and the company’s success rate-the more it appeals to her. After all, arranged marriages are the norm for millions of women around the world, so why wouldn’t it work for her?

A few months later, Anne is travelling to a Mexican resort, where in one short weekend she will meet and marry Jack. And against all odds, it seems to be working out-until Anne learns that Jack, and the company that arranged their marriage, are not what they seem at all.

“With good dialogue, three-dimensional characters, and page-turning scenes, McKenzie expertly explores what makes a successful marriage work and the lengths to which some people will go to find true love.” –Publisher’s Weekly

For more information on Arranged please click on the following links:-

A graduate of McGill University in History and Law, Catherine practices law in Montreal, where she was born and raised. An avid skier and runner, Catherine’s novels, SPIN, ARRANGED, FORGOTTEN and HIDDEN, are all international bestsellers. She is currently working on her fifth novel, SMOKE, slated for release in 2015. Her novels have been translated into French, German, Portuguese Czech, Slovak and Polish. And if you want to know how she has time to do all that, the answer is: robots.