Following on from her brilliant True Alpha hot paranormal short story series, Alisa Woods has just released Torment, the first short paranormal of her Dark Alpha series. I thoroughly enjoyed the True Alpha series (links to all 6 book reviews, and the festive novella are at the bottom of this post) and celebrate the release of Torment (Dark Alpha #1) today! 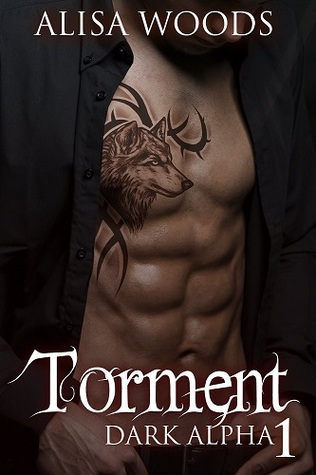 Jak enjoys the female human population of Seattle as much as any wolf, but his heart belongs to a female shifter who’s already mated. Worse, she’s the mate of his alpha’s brother.

Arianna was captured from her pack when she was only twenty and mated to a wolf whose dark side takes full advantage of her unbreakable bond to him. Her nights belong to him, but her days are free to explore other things… including feelings for a wolf she can never have.

Is love stronger than magic? Or will breaking an unbreakable bond destroy them both?
Torment (Dark Alpha 1) is 60 pages or 15,000 words. It’s the first of six episodes in the Dark Alpha serial.
Adult content. Ages 18+.

After reading the True Alpha series, I was thrilled to hear that there would be a new series from Alisa Woods in Dark Alpha. Fans of True Alpha, or indeed paranormal and shifter fans will love this hot story with it’s emotion, passion and action. I would recommend that True Alpha be read first to provide the reader with the full background (although not essential).

Jak is young, hot and turns many a human girl’s head. He is liked within his pack, the Red Pack, and his alpha looks out for him. Little do the pack know that he betrayed them once, and morally so. Jak has his wits about him and knows that Arianna was mated to his alpha’s brother, Mace, against her will. Now she has no choice but to be with Mace. But Jak can’t help feeling a little hot when in her company and wants her for himself.

The intensity of Jak’s feelings for her multiply as he is asked to bodyguard her when Mace allows her to attend University – instructions from his father, with the hope that Arianna can gain qualifications that she can bring to the family business. This does not please Mace as he’d much rather keep Arianna at home, but he can’t really go against his father, his alpha.

This is an opportunity of some freedom that Arianna has been waiting for, as opposed to feeling trapped in Mace’s home, bored, and nothing to look forward to as she knows Mace will have his way with her when he comes home. No, this is freedom, and what’s more she has been left with hot, young Jak to mind her!

Torment is a perfect title as both Jak and Arianna are feeling strong attractions to each other. However, as  the magic bond between Mace and Arianna can only break in one of their deaths, it looks pretty unlikely that these two can get together. Not to mention what Mace would do to them if he were to ever find out that Jak so much as looked at Arianna. It would certainly be the death of Jak.

Tensions run high between Jak and Arianna, but what will the future hold for them?

This short story holds a little of everything, including action towards the end. Readers won’t be disappointed and Torment is just the beginning of the Dark Alpha series. I cannot wait to read what book 2, Pleasure, will hold for us!

A copy of Torment (Dark Alpha #1) was provided by the author in return for an honest and fair review.

Torment (Dark Alpha #1) is available at Amazon US and Amazon UK.

If you would like to check out the info and my reviews for the first series, True Alpha, please click on each book below!