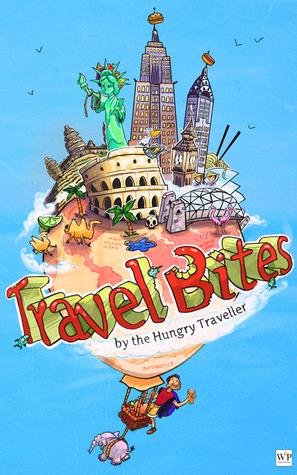 Blurb: Travel Bites is a collection of short stories that criss-cross the globe. It is the first work by The Hungry Traveller who has combined his two great life passions: travelling and eating!

The Hungry Traveller has been travelling for the last fifteen years and, along the way, has experienced many different sights, tastes, smells and cultures. Central to his travel experiences has been the role of food. Through his unique and very personal style of storytelling, you too can share in the highs and the lows of his stories from around the world. At the end of each story is a recipe for a dish inspired by his adventure.

Travel Bites will capture your imagination and curiosity; and will leave you yearning to plan your next holiday, adventure or escape!

The Hungry Traveller is a travelling enthusiast who loves to eat! When travelling, he enjoys meeting new people and engaging with locals to learn about their culture, history and the food that they eat. He is ‘currently between trips’, saving money, but always has his passport on hand, ready for his next adventure! He always likes to hear about other peoples’ travel experiences and your thoughts on his book!

Reading Travel Bites is a journey in it’s own right! It is a relaxing and enjoying read, as well as being informative and entertaining. As the synopsis suggests, it is the diary of a traveller who shares many a thought on his experiences, most notably his experience on trying different food and drink. He provides a detailed account of each place and food/drink he has had the pleasure of tasting and remaking to recapture the essence of the country it is from. This book is a treat for anyone who enjoys travelling and/or cooking.

Each chapter is set at a different place, and there is a handy recipe at the end of each experience which is fantastic for the reader to experiment with and try out! (I am not much of a cook, but I will be encouraging my partner to try out some of these recipes!) From camel burgers to cheesesteaks, Thai green chicken curry to steak and Guinness pie, and Moroccan mint tea to The Hungry Traveller’s perfect capuccino and many, many more delicious dishes to try out in your very own kitchen! It would be an amazing experience to try the different foodstuffs from various places around the world.

The Hungry Traveller has travelled (and lived) in other countries for over fifteen years. He has ample experience to compare his trips, or at least compare the food he has tasted. The fantastic prologue explains it all:-

“… During the time I had been traveling, I had lacked the interest and self-discipline to keep a travel diary, so I jotted down all of the events that I could remember on a page. When I looked at the list that I had compiled, I found that, like the story of eating the camel burger, many of my memories and experiences were linked to food!”

The reader can also enjoy reading about the different cultures and people. You can liken some of the stories to history and geography lessons as we find out about historic buildings and events, and shifts in society – both socially and politically – in many different countries. It is certainly great for building up general knowledge as we learn about Rome, the “Death Railway” (known to many as Bridge on the River Kwai in Thailand), and Vietnam, to name but a few!

The author also adds a personal touch as there are some nostalgic and emotional moments, especially when mentioning his ‘nonno‘ (grandfather) in Italy making pasta from scratch! There are also moments of amusement, beauty and even fear. It is written so well and fluid-like, easy to follow and set at a nice pace. It is a pure gem!

Two beautiful and thoughtful scenes that really reached out to me were:-

“…, in a scene that has not changed for hundreds of years, dhows sailed gracefully past. These traditional sailing vessels have ploughed the established trading routes between East Africa, the Arabian Peninsula, and the Indian subcontinent for centuries. It was not just the beauty of the sunset, but this feeling of witnessing a link in a long chain of human history, that so caught my imagination that evening.” (Zanzibar, Tanzania)

“It was a perfect evening to reminisce… The combination of the haze from the hot day and the sparse clouds in the sky produced a sunset with the most amazing colors. As the sun started to dip behind the horizon it gave off a deep red-orange light, complementing the darker red of the earth. The distant streaks of cloud turned a pink-red color while the sky directly above us turned purple. It was a perfect end to the day.

… I was… literally sleeping under the stars! I kept looking at the stars for as long as I could before falling asleep, wondering how long it would be until I would again be lying back gazing up at a night sky with so many stars?” (Eastern Africa)

There were a couple of moments that even reminded me of a Top Gear road trip. The setting off and finding campsites as he experiences The Highs and Lows of Bush Camping in Eastern Africa. This is just an example of the beginning of his journey from this chapter, but it does continue in the book as we read about the journey from Nairobi in Kenya to Harare in Zimbabwe. The vehicle used for transport was a 30yr+ red truck (with old bus seats for passengers) that creaked when it stopped!

“Once we had set off, cleared the traffic of Nairobi, and were on the open (empty) road, it became quite clear why we would spend so many nights bush camping. The truck had a top speed of around forty miles per hour, yet we would be traveling between towns, cities, and, more importantly, campsites that were many hundreds of miles apart. However, there was something quite mellowing about traveling at that speed. You could sit back, relax, and see the landscape gradually unfolding in front of you. And at that speed there was the opportunity, if you had keen eyesight, to spot wildlife, such as the occasional giraffe.” (Eastern Africa)

On approaching Harare events began to get a little scary as they drove into a riot!

“… people taking to the streets in response to high inflation and food shortages. At this stage the target was Robert Mugabe’s government as the cause of their problems… Although the truck was pelted with rocks and pieces of concrete, people jumped out the way of the truck once the driver floored the gas pedal.

… this attack was pretty unnerving… Foreigners being attacked and killed in campsites was not uncommon at that time in Africa.” (Eastern Africa)

Travel Bites is a very insightful first-hand account of knowledge and experience. You can feel the experiences that The Hungry Traveller has had through his words, and even provides some travel tips in there for good measure too! Travel Bites is not only a personal adventure of the author, but one that the reader can take too. The idea of adding the recipes of some fantastic and authentic food is a delicious side order of this brilliant read! It is more than fair to say that I enjoyed reading The Hungry Traveller’s stories very much.

Travel Bites was provided by Wattle Publishing for the purpose of a fair and honest review.

Travel Bites by The Hungry Traveller is available at Amazon UK and Amazon US.