Released today is Alisa Woods’ PLEASURE (Dark Alpha #2) in her paranormal/shifter series. This is an exciting series of action, adventure and passion. Sparks fly, hearts throb and lives are in danger. Will Jak and Arianna (mated to Jak’s alpha’s brother unwillingly) have any chance to be together at all? I strongly recommend in order to follow Pleasure completely you must read episode 1, Torment (Dark Alpha #1). And, for more shifter pleasure, the first series, True Alpha, is also a desirable read!! (Please see below for review links.) 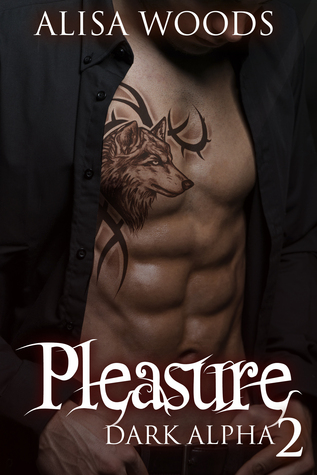 Jak and Arianna have found something special in each other’s arms… but is it something they can keep?

After an attack, in Torment (Dark Alpha #1), leaves Jak and Arianna in each other’s affectionate and loving arms, Pleasure brings them both, in particular Arianna, back down to earth. She is mated, against her will, to Jak’s alpha’s brother, Mace. To say that he would tear Jak to pieces would most probably be an understatement. Despite her feelings towards Jak, and their recent passion together, Arianna must hold back her feelings and thoughts from Mace, as well as ensure that she washes off Jak’s scent.

Jak is furious about the attack, wanting to protect Arianna and his fellow shifters. He is on a mission to find out who was behind the attack, who exactly they were attacking and why. Were the attackers working for humans? Or is it possible a witch was involved? Either way, Jak will make sure they pay for threatening and attacking in such a way that could have led to one or both of their deaths.

While Jak has the attack on his mind, there is also his thoughts of Arianna. He will kill for her and go to lengths to ensure her safety and to make her his. As Pleasure unfolds the reader becomes aware of an opportunity Jak may have of ridding the bond between Mace and Arianna – either that or Mace would need to be killed in order to free Arianna!

With Arianna unable to leave Mace’s house it is difficult for Jak to meet her. But will Jak find a way?

Dark Alpha 2 is an exciting read as we follow Jak and Arianna’s strong feelings, the intensity and passion between them and the fear that Arianna feels of Mace finding out of her betrayal. Pleasure is another heart-pounding read that will keep you on your toes, dying to read episode 3 of the Dark Alpha series, which will be released on February 16th 2015!

A copy of Pleasure (Dark Alpha #2) was provided by the author in return for an honest and fair review.

Pleasure (Dark Alpha #2) is available at Amazon US and Amazon UK.

If you would like to check out the info and my reviews for Torment (Dark Alpha #1) and the first series, True Alpha, please click on each book below!