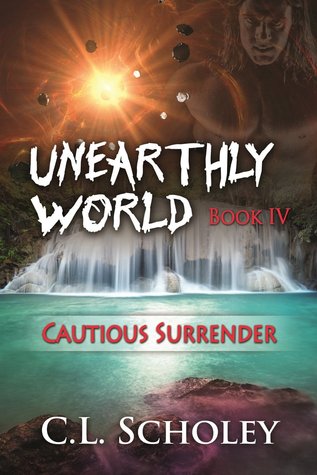 Blurb: Adan went from a living hell on Earth, only to be thrown into a new purgatory. The Zargonnii vessel she’d thought was her savior is blown to bits in an alien war attack. A wormhole sends Adan and her warrior protector to an unknown world. Her only hope of surviving the ungodly planet is in the hands of Blu, whom she loves. Unfortunately, Blu has another agenda.

Blu’s body burns for the little human female, but his entire adult life has one purpose, to father a son and create a family. If he mates with Adan and makes it back home, he’ll need to keep her close to his side, protecting her from his dangerous life. Human females only produce female offspring in Blu’s world. If they survive this planet, Blu has to decide if he’s willing to give up one dream for another.

Book 4 of the Unearthly World series carries on from Bethany’s Heart (Book 3), but can be read as a stand-alone as it focuses on different love interests in Adan and Blu. But it is still nice to hear the odd mention of the previous characters. After being saved from planet Earth, Adan and her friends found themselves being cared for by the Zargonii. Only, just as she is trying to learn of the new planet she is now living on they are attacked by an enemy, forcing Blu to escape with Adan on a smaller vessel, where they then end up travelling through a wormhole and landing on the planet Brax!

Without Zargonii warrior, Blu, to protect her Adan wouldn’t last a minute on Brax. The inhabitants of Brax are all alien creatures, most of which are exiled assassins and extremely deadly! The Braxians themselves are the assassins overseers, but many assassins do as they wish – and killing is their favourite pastime. Not only does she have to worry about these, but there is also the deadly green gasses of the atmosphere during the night that she needs safety from. With many dangers to overcome, and only a small hope that the Zargonii will come to their rescue, Adan is left in fear of her life, but with Blu at her side she knows he will do all he can to save her.

Adan is in love with Blu, and has been since the moment she met him. It is his strength and over-protectiveness of her that attracts her. Blu is attracted to Adan too, but his conflict lies with him wanting a son. If he mates with Adan he will be mated for life, but a human female cannot bear him a male offspring. He also knows that he can’t expect Adan to wait for him while he Holidays (mates) with a female of his own kind in the hope for a son (which may not happen), only to mate for life with her after. This would be disrespectful and selfish of him.

At the same time, his desire burns for her whenever she is near and this is another conflict he has to fight if he wants a son when he returns to his home planet. For now his honour is in keeping Adan safe, and so whilst they are on this godforsaken planet he can’t let her out of his sight!

“… He would need to keep her as close as possible. There was only one problem with his plan – she drove his body into a sexual nightmare when she was nearby.The attraction she emitted in her pheromones was almost too much for him to resist…”

However, being brought together during some intense moments of danger, and with his honour to care for her and ensure her safety, situations do become much more intimate between the two of them – both emotionally and physically. Will Blu decide to give in to his need and desire for Adan, or will he stay true to his dream of wanting a son?

Another aspect of the story that I loved was the humour. There is the sarcasm that Adan uses on Blu, and the one-liners from Blu every once in a while.

“… I have a hard on so bad I could beat an assassin in the head to death with it.”

These moments create a relief during times of high tension and fear, enlightening the mood and bringing the characters closer. It certainly made me smile at times.

One of my favourite characters was an assassin called Veikko. He is equally deadly and fearsome but there are moments when he shows compassion for Blu, and Adan in particular. This feeling is something the other assassins do not have. And yet, there are times when the reader will question his motives. Is he really helping them? Does he want Adan for himself? Is he tricking them?

“… The assassins she had met so far excluding Veikko were disgusting and brutal. Veikko was creepy enough but possessed compassion…”

I found Cautious Surrender to be a thrilling, exciting read with plenty of tension and fear, as well as romance and fun in between. There is a tremendous amount of adventure packed into the 139 pages, making it fast-paced, thus a quick read, that will leave you on a high and looking forward to the next C.L. Scholey read!

Cautious Surrender is available at Torrid Press, Amazon US and Amazon UK.