RELEASED TODAY is the latest instalment of this super New Adult paranormal romance series, Escape (Dark Alpha #4) by Alisa Woods. The Dark Alpha short story series is sequel to the True Alpha short story series. (Each could be read as stand alone series, however it is strongly recommended that each individual instalment of a particular series should be read to follow the whole story of that series completely.) Escape is my favourite of the Dark Alpha series so far! 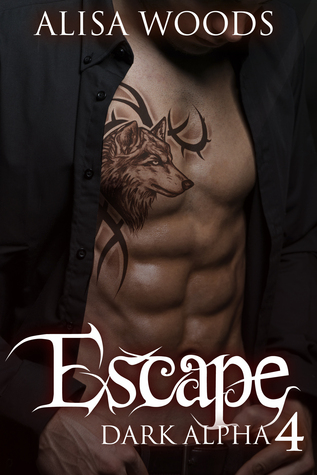 Blurb: PART4: Escape (Dark Alpha 4)
Shifters live in the shadows of Seattle, just under the skin of the alpha male, dot-com billionaires who are building a new Silicon Valley in the Emerald City.

With Arianna’s family looking for her, Jak’s plan to flee the state just got a lot more complicated. But before he can worry about that, he has to break her free of Mace’s hold.

Is love stronger than magic? Or will breaking an unbreakable bond destroy them both?
Escape (Dark Alpha 4) is 60 pages or 15,000 words. It’s the fourth of six episodes in the Dark Alpha Series.

Contains strong sexual themes/language and is meant for readers over 18.

After dealing with his deception to his own alpha, Gage, Jak has made the decision to free Arianna – the love of his life (but unwillingly mated to his alpha’s brother, Mace) – and there is no going back. He wants her to be free, even if that means he will not be able to join her if he gets caught!

Deception (#3) was a fantastic build up to this exploding instalment. Maybe a little slower without too much action, it provides all the thoughts that are in Jak’s mind and proves how determined he is to go ahead with his plan to save Arianna from a life of misery with Mace. Therefore, Escape is straight in with the action, tension and the fighting. It is a thrilling read that will keep you gripped throughout!

Whilst Arianna is submitting to Mace, in front of his beta’s, Jak was hoping to use the element of surprise to attack them and escape with Arianna. But when Mace’s beta’s clock on to Jak’s presence all hell breaks loose and there is a brilliant action sequence. Will Jak free Arianna? Will they survive Mace’s wrath when he realises what they have done?

Not only that, but now it has been revealed that Arianna’s family have been looking for her, both Jak, Arianna, as well as the reader, will fear for the well-being of her family if they are faced with Mace. Jak wants to protect Arianna, and now her family, from Mace. But will it all prove too much for him?

Complete with action and hot romance Escape is my favourite instalment of the Dark Alpha series so far! Jak and Arianna are sparked with a different kind of dread. They were always worried what would become of them if they were found out and caught, and now they have been found out. Adrenalin is running high for all characters, as well as the reader, as we hope they will find safety. Making matters worse, are the injuries Jak sustained from the fight, making the reader question if he will make it.

To elaborate further would spoil this instalment. I can only state how BRILLIANT it is. Paranormal/shifter fans will love these series’. They are written in such an excitable manner that the reader cannot help but love the characters. The short story aspect means that each book can be read within an hour, packed with action, hot romance, love, tension, and so many more emotions. You won’t be able to wait for the next one – which will be released in two weeks, on March 16!

A copy of Escape (Dark Alpha #4) was provided by the author in return for an honest and fair review.

Escape (Dark Alpha #4) by Alisa Woods is available at Amazon US and Amazon UK.