We welcome the second instalment of the paranormal fantasy/romance series, Rebel Riders, by C.J. Pinard, in SOUL REDEMPTION. Readers will love the dark atmosphere of this series, with some very flawed but fantastic characters, plenty of mystery, and a great deal going on. There are elements of the novel that reminded me of a cross between The X-Files, Sons of Anarchy and True Blood! Follow the adventure of Nolan Bishop as he tries to find answers on symptoms of him being turned, and yet not full vamp or without a soul. Will he turn? Will he eventually lose his soul? 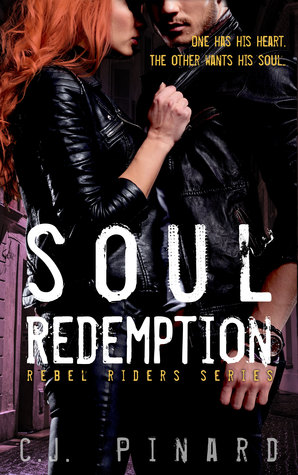 Blurb: Faced with unthinkable changes, Nolan Bishop seeks to come to grips with his new version of mortality. While his relationship with Charity Sheridan was already rocky, he’s now facing a whole new set of challenges as they continue to try to find a balance to the love that has just begun to blossom between them. Meanwhile, her twin Eva has violent vengeance on the mind, and the succubus won’t settle for anything less than Nolan’s ultimate demise. Heading back to New Orleans at the request of the BSI, Nolan will have to face Joel Reichert, the old vampire whose oldest friend is now dead because of him. But is Joel really an enemy?

A new, young friend in the Rebel Riders group gives Nolan a much needed reprieve from the stress of his new way of life. While Archie and the Riders don’t really know the full extent of Nolan’s new problems, he continues to hide the horrific things he has to do in order to stay alive. Will Nolan come out better than he was before Eva tried to take his soul, or will he crack and break under the pressure once he realizes what the succubus has really done to him?

After having his soul taken by the beautiful-but-evil succubus, Eva, Nolan Bishop is left in a strange state. It appears that the blood from his new love Charity, Eva’s human twin sister, has prevented his soul to be taken for good. However, he still has some symptoms of being a possible vampire, i.e. sharper senses, discomfort in the sun, back pain from a previous accident has subsided, he is pale, and he has a curiosity about blood!

Soul Redemption carries on from Soul Rebel (book 1) nicely by moving on with the story at the same time as recapping readers in the early chapters. With Nolan working at Archie’s Garage, restoring motorcycles, we are reminded of Archie and his motorcycle club, the Rebel Riders, who hunt down vamps at night and kill the ones who kill and feed off humans. Now Archie is hoping for Nolan to join them. Little does he know of Nolan’s possibility of being a vampire himself!

One member of the Rebel Riders who becomes acquainted with Nolan is Kovah. Kovah is completely against all vampires killing and feeding from humans. He believes that they should all be killed. He comes across to the reader as quite extreme with his viewpoint, and makes the reader question if he will attempt to kill Nolan when he sees the blood hunger in Nolan’s eyes. Then again, Nolan discovers that he has more in common with Kovah than he initially thought. Will there be conflict between them, or will they become great friends? Either way, Kovah is a brilliant character to add to the many others of this series – with some hanging in the balance of good and bad!

“… Do you feel like she still has your soul?”

Nolan wants answers as to exactly who or what he is. Prepared to help the BSI (Bureau of Supernatural Investigation – also a part of C.J. Pinard’s ‘Enchanted Immortals’ series) with their knowledge of the paranormal, and wanting the answers for himself, Nolan agrees to go to New Orleans with Agent Nelson and subjects himself to blood tests, scans and many questions.

While in New Orleans he decides to face old vampire, Joel Reichert. Nolan knows that he will also have answers, but he also knows that there is a great chance that he will want revenge for Nolan killing his oldest vampire friend, Ansel. This could be a very brave or a very stupid move for Nolan. But something he feels he has to do.

“… He was an old vampire who deserved strength and respect. A man who Nolan needed to make an ally of, not an enemy.”

Meanwhile, Charity is not impressed. Although she is aware of what he has been through, she doesn’t fully know of his symptoms and curiosity. Throughout the novel there are times of Nolan keeping busy, whether it be to go to New Orleans or ride around with the Rebel Riders to hunt vampires. With Charity being stood up by him she begins to get annoyed with him. What she doesn’t realise is that he has started to love her but wants to protect her from the supernatural and the changes that he is facing.

Charity’s situation is left increasingly more complex when her twin sister, Eva, and her vampire friend, Brad, pay her a visit. Eva is aware that Nolan is different and that his soul is not hers. This is frustrating for her and so she seeks revenge and wants to get her hands on Nolan. She’d figured that the best way to find him would be through her sister. Eva becomes increasingly impatient and trickery is just one side of her evil that she can use to get her sister’s, and ultimately Nolan’s, attention!

The plotline and characters of the Rebel Riders series are excellent. The reads are thrilling and gripping, making for a fast read due to the action and excitement. Not only this, but the author also draws the reader in by creating a brilliant, dark atmosphere. This, mixed with Nolan’s curiosity, brings plenty of mystery to the fore and the reader just knows that there is a great deal more to be revealed.

Soul Redemption is a mesmerising read of the paranormal and romance that you won’t want to leave! Be warned: there is a brilliant cliff hanger at the end where Eva’s evil trickery does not disappoint!

An Advanced Reader’s Copy was provided by the author in return for a fair and honest review.

Soul Redemption (Rebel Riders #2) by C.J. Pinard is available at Amazon US and Amazon UK.

Other reviews for C.J. Pinard:-