If you are a fan of shifter paranormals with plenty of heat, action and romance then you REALLY need to pick up an Alisa Woods book. With her already successful NA short story series’, True Alpha and Dark Alpha, River Pack Wolves is the author’s full story, third series. Each story of the River Pack Wolves can be read as a stand alone, but as a HUGE fan I would recommend that Jaxson, Jace and Jared be read consecutively.

The River Pack Wolves series consists of three full-length stories, with each individual book based on a River brother and their personal romance. However, there is a running theme throughout the series whereby shifters are going missing, being abducted by the government and military to be experimented on, thus stirring fear and anger amongst the shifter community that the River pack decide to take on themselves! 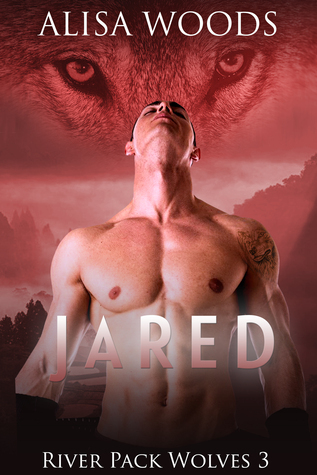 Blurb: He was broken by the war. Her secret could destroy her family.

Ex-Marine sniper Jared River left the war, but the war never really left him. He’s a broken wolf who’s only good for one thing now—killing men. And he’s peering down his scope at Senator Krepky, the anti-shifter politician about to ruin the lives of all the shifters Jared loves.

Grace Krepky is the daughter of the Senator, a good girl with a passion for her father’s politics and who’s earned her way into being his campaign manager. Only problem? She’s secretly a shifter… and the clock is ticking until her own father inadvertently forces that secret into the open, ruining both their lives.

Jared’s all set to pull the trigger when he sees something shocking through the Senator’s glass walls—his daughter is a wolf. Jared puts his gun aside to go after the fleeing girl, but he already knows this can only end in one of two ways—either he’ll convince her to reveal herself to the Senator and stop his anti-shifter legislation, or Jared will have to assassinate her father.

If only she wasn’t making him come alive again…

Jared is a complete novel with HEA, the third in the River Pack Wolves trilogy (all standalone stories, but best enjoyed if you read them in order!).

Contains scorching hot shifters, alpha military heroes, and dark family secrets. Only readers over 18 should dive into the deliciously hot world of the River brothers.

AFTER THE RIVER BROTHERS: Look for the Wilding Pack Wolves series to start soon!

JARED is a fantastic ending to the fast-paced action and HOT romance shifter series, River Pack Wolves. Alisa Woods‘ story openings are usually gripping from the beginning, and Jared is no different; opening the story in a suspenseful manner with ex-Marine Jared at the ready to assassinate Senator Krepky, an anti-shifter politician on the brink of setting out new legislation for all shifters to register.

“It didn’t take a genius to figure out where that was going. Not only would it be stupid-easy for the government to round up shifters, but shifter-owned companies like the private security firm Jared owned with his brothers, Riverwise, would go out of business.”

Jared is a broken shifter, seeing himself only as a killer. Although his killing was for his country during his time in the Marines, it is really all he knows. He has found it difficult to adjust to civilian life, lost his mate, and keeps himself to himself. Killing Senator Krepky, who is also believed to be behind shifter abductions and an experimental program, isn’t worth thinking twice about.

However, Jared notices the Senator arguing with a young lady, the Senator’s daughter, and Jared decides to wait until the Senator is alone before pulling the trigger. Keeping eyes on them both at all times, there is plenty of suspense during these first few pages. The Senator’s daughter leaves the room annoyed, and as Jared follows her with his eyes to ensure she is out of the way… she shifts!

I loved this turn of events; the way it shocks Jared. The way in which the author has written this scene makes it feel like your reading in first person, when the story is actually written in third. The way in which she describes what he is seeing, what his reactions are is very well written and described. Even though Jared has his chance to prevent the Senator, he is stunned by Miss. Krepky and thoughts race through his mind as he follows her wolf, leaving Senator Krepky in his office with no knowledge of what his own daughter is, or that he was about to be assassinated.

Grace Krepky has kept her shifting a secret from her anti-shifter father. She has worked her way to becoming her father’s Campaign Manager and enjoys her work. However, fully aware of the new shifter legislation that her father is about to bring in, she hopes to try and talk him out of it. Keeping her secret has meant that she has little knowledge of shifter life, and has nobody to confide in or talk to. And, there’s also the worry of what her father will do if, or when, he finds out what she is.

The meeting between Jared and Grace provides both of them with new possibilities. Jared may have a way to prevent the new legislation, without needing to kill the Senator, if only Grace could confide in her father what she really is and maybe the love for his daughter will change his whole perspective. Meanwhile, Grace would finally have somebody to teach her shifter ways, help her be her most natural self, and having someone to talk to. Thus, making life so much easier.

Not only do they have a chance of these, but natural instinct from their inner-wolves attract each other in a way so deep that neither of them had expected. The physical attraction, the protectiveness of each other – Jared emotionally, Grace both physical and emotional, and sheer desire all unite to create a very powerful and suspenseful romance.

A copy of Jared (River Pack Wolves #3) was provided by the author in return for a fair and honest review.

You can purchase JARED at Amazon US and Amazon UK.