It was a great pleasure to be approached by author, Alison Brodie, and be asked to read The Double. I am so very glad that she did. It’s an amazing adventure; a great book to read if you’re planning a holiday or even basking in the sunshine in your garden. Get ready for the most relaxing adventure you’ll experience!

“The luxury of living a lie.” 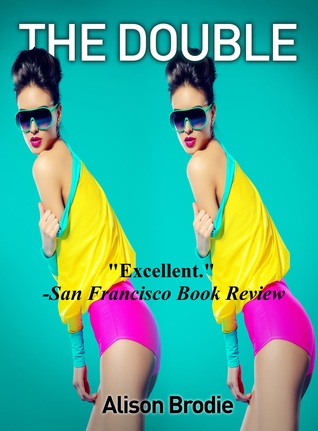 Blurb: A night she can’t remember. A week she won’t forget.

Beth is mistaken for rock star Sonita La Cruz, and ends up on a billionaire-dollar yacht. As a shift-worker in Glasgow, Beth has only known hardship. Now she’s in a world of uniformed stewards, delicious French food and rows of gorgeous designer clothes. Beth keeps quiet about the mix-up, determined to wear every outfit in her wardrobe before she’s sent home. What’s wrong with a little play-acting? Beth takes to the role of rock diva like a duck takes to water.

Aleksandr, the captain, arrives and is astonished to see a beautiful raven-haired girl lying on deck issuing orders through a loud-hailer. After talking to Beth, Aleksandr realises what has happened. His smuggling buddies, knowing Aleksandr needs to speak to Sonita about a kid’s crisis, grabbed Beth by mistake. Aleksandr is desperate. To save those children, he needs money, but Sonita has disappeared.

Beth rises to the challenge. She looks like Sonita, so why not BE Sonita? Beth does a magazine interview for one million dollars, and ransoms herself for another million. Beth saves the kids … but can she save herself? Too late, Beth discovers why Sonita disappeared.

A love story set against the backdrop of a luxury yacht on the Côte d’Azur, a civil war in the Eastern Bloc, and a Glasgow housing estate.

Alison Brodie’s The Double has it all; from diva Sonita, the rock star, being stalked and threatened, to a gritty, realistic housing estate in Glasgow where nurse Beth is trying to make sense of her life, right through to a kidnapping followed by a luxurious adventure on a billionaire’s yacht on the Côte d’Azur. Meanwhile, Aleksandr, the captain, has had to deal with the effects of a civil war in the Eastern Bloc, and is now fighting to save many children suffering with tuberculosis as medical supplies cannot reach them and warfare is threatening their makeshift hospital site. Yes, if you’re looking for a little drama and mystery in a well-constructed romance story this is perfect for you!

The opening chapter sparks the interest of the reader immediately as we find a seemingly dark character acting secretly and wants Sonita La Cruz dead! This is a dark start for a fun, romance novel, but it captures a sense of fear and suspense from the offset, making the curious reader need to find out what becomes of both parties.

Although written in third person, the reader has an in-depth take on each main character as whole chapters are focussed on one at a time, as we discover their current situations as well as their background. My favourite character has to be Beth, partly for wanting the escape that she is able to have from her average life, and partly as she is the one that takes many risks throughout the story.

Beth is at the point in her life where, even though a mum, she is still young. Her kids are independents now, and aside from her nursing job, all  she has is a selfish man in Andy, and a shabby tower-block flat. Once the initial kidnapping is realised, Beth begins to come round to the idea, choosing to go along with it. I mean, after all, when does she ever feel free; free from routine, free from work, free from Glasgow, free from Andy and his controlling ways. Surely she deserves some luxury and freedom at last. Why not pose as beautiful superstar Sonita La Cruz? Beth begins to think that maybe her dreams could come true, and she doesn’t have to feel so trapped in her life. She adapts quickly and learns how to relax, to enjoy life, rather than stressing about her work, Andy, money, etc.

“This was so different to sunbathing at home. There, she had a tiny balcony, just about big enough for four plastic stools, a bike repair box and a scrawny plant….. In the summer, between five and six in the evening, the sun would touch one corner of the balcony – high up. Desperate for sunshine, she’d stand in her knickers and bra, one foot on a stool, one foot on the railings, her hand holding onto the washing line for support….

… Now, instead of teetering on the edge of a council block in saggy grey knickers, she lay on a cushioned sun-lounger alongside a luxurious pool, on a gorgeous yacht with a champagne re-fuelling depot nearby and an army of uniformed stewards, out of sight, but close at hand, ready to be summoned by the tinkling of a little bell.” (Beth)

That said, it is also clear that Sonita La Cruz is also looking for an escapism. Although a rock star, she is not recording the style of music she favours, she is very much subjected to media attention constantly, and her real feelings lie with being charitable to those, especially children, in need – something that her partner ignores. During the course of the story, ignorant of Beth’s situation, Sonita tries to find a relaxing moment herself, as she keeps her head down low from any threat, and her busy lifestyle.

It is a certain read in particular for the summer and holiday season. And, one of the most exciting and fascinating parts of the story were, for me, the way in which it provides a largely relaxing read despite the dark drama/mystery that lies beneath the surface. I just loved imagining myself to be in Beth’s shoes sunbathing on a luxurious yacht on the Med, blue skies, blue sea, with fine dining and clothes, etc, and not worrying too much about the consequences until I’d have to.

The icing on the cake is the knowledge that Beth is quite aware, certainly as the story progresses, that it is all in the name of charity; in being able to hopefully provide many children with the treatment that they need, during an absolutely crucial time when no one else can! Mix that in with a chance of romance and it is perfect. But will Beth realise where her heart is really at before it’s too late?

If you’d like a book to transport you on a relaxing holiday, with fun, drama and romance The Double is just the one!

A copy of The Double was provided by Alison Brodie in return for a fair and honest review.

You can also check out Alison Brodie’s author bio, along with an excerpt of The Double here.

2 thoughts on “**REVIEW** The Double by Alison Brodie”