KOVAH: THE SOUL SEEKER is released today!! From author, C.J. Pinard (The Rebel Riders, The Beautiful Immortals) comes the paranormal, fantasy romance that fans have been waiting for. After following Nolan Bishop (the Rebel Riders trilogy) almost losing his soul from being bitten by a succubus, it is now time to hear Kovah’s story; the hybrid, half-human/half-vamp, who hates and hunts vampires, slaying them, and feeling despair and angry for what he has become. But, when he begins to have a purpose, friends and emotions he never thought he’d feel again, will he be able to admit it to himself that his existence maybe not so bad afterall? 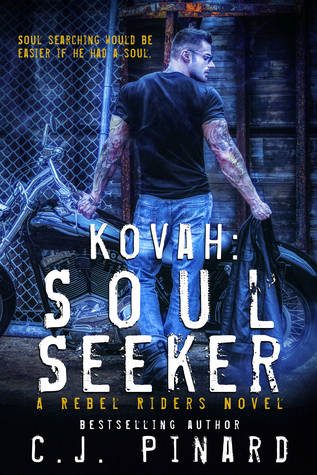 Blurb: The night Dominic DeLuca meets a succubus, his life of all-night partying and college classes is over in an instant. Fundamentally transformed inside and out after killing her, he exists much differently for the next 10 years than he had before. When his freakish eyes and lack of aging become too much to explain, he leaves Dominic and New York behind and becomes Kovah Sanagra, the foul-mouthed, angry vampire-hunting hybrid who literally has nothing left to lose.

His new life takes him to New Orleans, where he finds pleasure in the large variety of vampires he has to choose from when he wants to kill something. But when a female vampire who had helped him in the past shows up during his hunt, he realizes he has some unresolved feelings he’d rather not deal with. Upon meeting Archie and the Rebel Riders, Kovah feels as if his life might have some purpose; some direction. But still, the female vampire keeps showing up… and when a time comes that she needs Kovah’s help, is he going to repay her for how she saved him so many years ago, or will his hatred for the vampire race override what he knows he feels for her in his hardened heart?

Kovah: Soul Seeker is a Rebel Riders novel intended for readers 18 and older.

This deliciously dark, fantasy paranormal romance is the perfect escapism. After being introduced to the strong, stand-out character of Kovah in the Rebel Riders series, fans (myself included) have been eagerly awaiting this stand out novel, Kovah. A hybrid, half-vamp/half-human, turned after losing his soul to a succubus, Kovah now spends his evenings with his motorcycle friends, the Rebel Riders, eliminating vampires and, his favourites, succubae.

Kovah’s character is dark, mysterious, stand-offish to most and particularly aggressive to vamps, but he is an incredibly exciting character. He may be a survivor but he has lost his life as he once knew it. He has given in to the understanding that he’ll never age, and most probably never have the long term love that many enjoy. He acts the tough guy, and is often one, but deep down he knows nobody would cope easily with his experiences, and the nightmares he has are constant reminders of what happened to him.

Like PTSD, he relives the events over and over, which ultimately leave him with a peed off attitude. He has an exhilarating, dangerous past that overwhelms him. And, although a badass with aggressive tendencies, there are moments when his emotions have led to him crying in despair, in shock, for what he has done and what he has become.

However, Kovah is not as alone as he thinks. He has Archie, his boss at the motorcycle garage and leader of the Rebel Riders, along with his new companion, Nolan Bishop. After his first suspicious instincts, there becomes a growing respect and friendship between these two. To fully appreciate how Kovah and Nolan become so close it is highly recommended that the Rebel Riders trilogy (Nolan’s story) be read as it details encounters between the two more intricately. And, lastly, there is Violet; the female vampire that saves him in his darkest moment, and years later comes back in his life.

To relieve his aggression, just for kicks, he has been seeing Janice, a kinky vamp that provides him with the release he needs. However, in contrast to her are his growing feelings for Violet. It is interesting to see how this situation unfolds, how Kovah deals with his feelings, especially as his strong dislike for vamps won’t allow him to get too involved with one. They can’t be trusted. Or, can they?

A member of the BSI (Bureau of Supernatural Investigation), Violet, has been made aware of a vamp motorcycle gang and approaches Kovah for help. His capabilities, being a hybrid, may allow him to get close and find out more. But, will Kovah get in too deep, and will he really be willing to help Violet out?

Kovah is a very suspenseful read that is complete with action, surprises, romance and fun. It is a quick read due to the pace of the story, with some excellent characters to follow, both new and old. The author has written Kovah in first person, which I enjoy as a reader simply because it allows the reader to get inside the head of the main character, understanding their thought processes, and in turn their actions/reactions.

It is a great read that fans of the series will absolutely love. As mentioned before, I strongly recommend that the whole Rebel Riders series be read to fully appreciate Kovah’s character, how he stands out in the series, and to see his relationship with Nolan blossom and become a great bromance!

An Advanced Reader’s Copy was provided by the author in return for a fair and honest review.