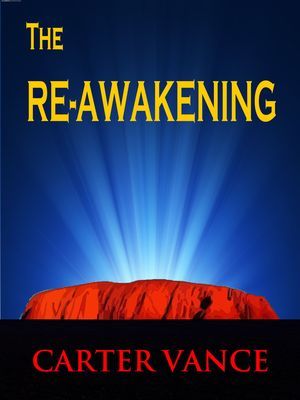 Blurb: The saga continues. He has returned, but not yet awakened to fulfill His destiny.

With The Re-Awakening, the second book of the Second Coming Series, author Carter Vance continues the thrilling story of the modern day return of Christ.

Like the first book, it is full of action and suspense that takes place in a chaotic world reeling towards the prophesied Apocalypse.

The first book, The Return, re-counted the circumstances of His birth. The Re-Awakening chronicles the events of His growth and the re-acquiring of His Christ Consciousness.

The first son in the bloodline of Jesus Christ, Lazarus J. Christos, must immerse Himself in the modern day world and prepare to fulfill His mission that has been prophesied for two thousand years.

With the aide of the order of the Knights Templars, long existing in the shadows, and the even less known organization of The Founders, young Lazarus, on a path of personal discovery, encounters His doubts and faces His fears of His ability to fulfill His mission.

Meanwhile, His enemies mount their plan for His eradication and their goal of world domination. They believe there is a way for them to prevail beyond the prophecies. These Dark Forces embark upon a worldwide hunt for legendary artifacts of power that might tip the balance of power to their advantage for the forthcoming ultimate battle of good versus evil for the soul of humanity.

Another mysterious, dark read from Carter Vance in regard to the Second Coming!

After failing to prevent the rebirth of Christ (The Return, Second Coming #1), the Dark Forces are now out to track Him down in order to keep a watchful eye on Him, being ready to pounce at any time but also to be made aware of His movements and gauge what He could be learning and planning for future events.

Meanwhile, these Dark Forces also spend their own time planning for a major worldwide event to take place in which they will almost probably come head-to-head with the Reborn and therefore seek many relics and objects of religious and powerful value to assist them with their cause, in the hope that these items will give them power, wealth and control.

The Re-Awakening is written well, if a little on the heavy descriptive side. It is also an educational read in some areas. The author has again clearly carried out a great deal of research into historical events, myths, relics and many religious ideas mentioned in The Bible. This is obvious due to his fantastic in-depth explanation of them and their meaning. Carter Vance supports his fictional side/story well with these historical facts, and biblical/theological ideas. Vance also expresses his knowledge of The World and it’s geography as this trilogy covers almost all areas of the globe.

As The Re-Awakening is the second book of a trilogy I found most of this book was the basis for the third and final story in the Second Coming Trilogy. I found the first half, particularly the first third quite descriptive of the relics, their meaning and concentrating on the politics of the Dark Forces, mostly within the Vatican.

Due to the heavy descriptive style I found The Re-Awakening to be a more challenging read as it did not keep me engrossed at times. (Although it would be fair of me to mention that this is not my usual/preferable type of read.) Many of the chapters begin at different points and/or with different characters of the story during the first few chapters, making it a little more difficult to follow. Although this does make it an interesting screen-play style read.

For a fictional story it does lack the fluid-like story-telling and the reader can easily lose track for a while. Due to this writing style, as I mentioned in my review of The Return (Book 1), there is little connection between the characters and the reader, making it difficult to relate to and sympathise with the characters.

As the Re-Awakening is setting up for the finale, Book 3 of the Second Coming trilogy, I did find it interesting how Laz Christos (the Reborn) develops into a young man and how he is educated and experiences life across the globe. Although initially wanting to put The Re-Awakening down, I persisted and was amazed by the end just how much it had actually sucked me back in. It certainly has an air of mystery about it. I did miss the Knights Templar a little as they did have little to do in this book, however I did welcome reading about Laz and his family, as well as the kinky nuns working for the Darker Side who do add a little relief to the seriousness of the book!

A copy of The Re-Awakening was provided by the author for the purpose of an honest and fair review.

The Re-Awakening is available on Amazon UK and Amazon US.

This book was received thankfully from the author in return for an honest and fair review.

‘The Return’ is a story about the rebirth of Christ, the second coming. Only, as the dark forces are doing all they can to prevent this major event from taking place we find out that the Knights Templar are still in existence and have been waiting for this moment where they can use their resources to protect Him and His family.

The story begins with Geoff, an investment banker, having a holiday at his friend Jacque’s house in Southern France. Here, Geoff finds a secret room full of literature. He discovers a book referring to the Knights Templar, written in modern day language and referring to the Templars as being in existence today. From here, Geoff quickly takes a plane back to London and carries out in-depth research regarding the Templars and their purpose, theories and background. He travels various places around the globe to carry out more, extensive research.  And, gradually, certain people begin to get suspicious and track him down to find out what he knows.

I found Geoff to be a little naïve as there was at least one occasion when he felt that he was being followed. Later, he is approached by a woman, Regina, claiming to be a lawyer, who just happens to be inquiring about something in relation to the Templars and yet he doesn’t add these situations up. He doesn’t seem to think that it is too much of a coincidence. This was a little frustrating and he was subsequently killed.

Personally, I wasn’t happy with the storyline at this point as Geoff appeared to be the main character, the hero, and yet here he was being killed off. I was left trying to pick up the pieces of the other characters to try and connect with them but this did prove to be difficult as up until this point Geoff and his findings were focused heavily on, making the other characters appear to be more brief, background characters.

The story then unfolds to reveal that Geoff’s friends, Peter Christos and Sarah Davidson, become an item, marry and Sarah falls pregnant. Her baby is destined to be Him, the one that the human race has been waiting for for centuries. This seems to happen all too quickly with very little attention paid to connecting with these characters and feeling their relationship and romance grow. More description and detail were needed in these areas.

The reader is then taken on an adventure as the Knights Templar make preparations for the birth and protection of Him, whilst constantly under the threat of the dark forces. Both sides have very strong allies and support from the Vatican to scientists to drugs traffickers, etc. This adds intensity to the story as the reader is never sure which side will possibly win as they both seem fairly equal.

This novel is mostly written to the point. It is very direct and factual when it comes to theories, however it did lack some description in parts and emotion to the characters. On the one hand, it was nice to follow as theories were occasionally repeated, not too often, but enough to keep the reader in check. And, on the other hand, it would have been an idea to elaborate more with romance and emotion on the relationship between Peter and Sarah, thus helping the reader to engage with their characters and gain a great sense of how they became so close so quickly.

When it comes to the theories, it is obvious that Carter Vance has a great deal of knowledge in this area and he does explain these ideas well. This is the first book I have read covering this subject and I initally felt that this would be way over my head, however I did understand and enjoy the storyline.

My overall opinion of ‘The Return’ is a mixed bag. However, on the whole it is an enjoyable, well-written read. It has kept me entertained throughout and it is surprisingly a nice read to follow, as opposed to losing me with language and theology.