The Daughter of Darkness series finale is here in GUARDIAN. Following Lotus’s Journey has been a pleasure. Lotus, half-vamp, half-faery, has been teased and beckoned in her dreams by her evil father, Vlad Montour (a.k.a. Vlad the Impaler). Discovering his ideas for taking powers and controlling all supernaturals, his methods for achieving that, and many other evil acts, it becomes clear that he has to be stopped. But, will meeting with her sisters to discuss a plan of action turn sour? Especially since one was once on the dark side herself not too long ago? 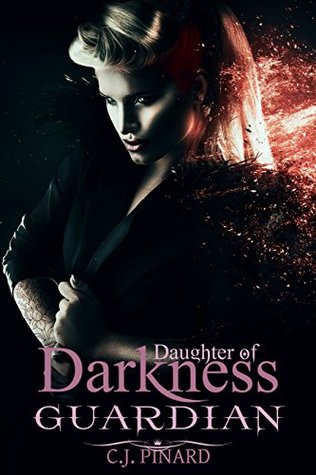 Blurb: Realizing that a confrontation with Vlad had slipped out of her grasp, Lotus sets off with Drew and Jezebel to formulate another plan of action. But then a phone call from Tori, the sister she’d just learned about but had never met, changes the course of their plans.

Lotus now has to search for some kind of heirloom or jewel left to her by her biological mother. But where would she find such a trinket? She’d been orphaned for over 100 years and didn’t even know her mother’s name, let alone anything she’d left her. With more determination than ever, the assistance of a witch, and her other gifts, they will help guide Lotus to find it. But what else will they find when going on such a hunt?

The final showdown to kill Vlad has been set and as Lotus and Jezebel finally meet their long, lost sisters, Tori and Blair, they realize the chances of them getting away with killing Vlad and living to tell about it are very slim. Still, their resolve is strong; the sisters are strong. The question is: Will it be worth it? Giving their lives to rid the world of their evil father, Vlad the Impaler, for good?

Find out in this heart-stopping final instalment of the Daughters of Darkness series.

I have followed Lotus’s journey through each book of the series, and GUARDIAN is a brilliant story to end the series. Lotus has certainly come a long way throughout the series; although half-vampire and half-faery she has lived most of her life in a most human-like manner. Over the course of the series she has learned so much about herself, her capabilities and her family. She has even sustained a long-term relationship with cute, hot Lycan, Drew, a neighbour and protector. And yet, she still loves to make her everyday life as human-like as possible, i.e. going to work and general life as a mortal.

“… why was I living as a mortal? I’d told them that it was because I knew no other way. That was the truth, partially, but the other half of me knew it was because it was safe and harmless to pretend to be human. However, deep in my dark heart, I knew I should venture onto the wild side – the dark side of the supernaturals – and see what it had to offer.”

It is very easy to connect with Lotus’s character in this manner. Her character, within the story, acts as a bridge between the reality and the supernatural world. In Guardian, Lotus has to make some uneasy decisions and to take chances, along with her sisters, in the hope of defeating their evil, vampire father, Vlad Montour (a.k.a. Vlad the Impaler). And, the reader can sense a change in Lotus in exploring more of her supernatural side, especially as she would need this to help be rid of her father.

Told not only from Lotus’s point of view, the reader also follows Jezebel’s as it is also her final book of the series too! This is very fitting as these sisters are so close at this point and in almost every scene together. In fact, aside from Drew, Jezebel is the closest person to Lotus. Both become cautious when they meet with their other two, newly-found sisters, Tori and Blair, especially Tori as she was brought up and worked for their father.

However, there are some emotional twists when we learn about the sister’s backgrounds, their mothers, and just why Tori may have turned against their father. Along with the final showdown, I felt that the meeting scene of the four sisters was a vital part of the story. Were they going to turn on each other? Could they be trusted? These were just some of the questions running through my mind. It is written really well, and the caution and emotion felt real.

The overall atmosphere of the story, and indeed the series, is dark, eerie, and full of suspense and mystery. It darkens still as the sisters try to take on their powerful, evil father. And, it is he that creates the mood and tension. Trying to take the power and control all supernaturals is his goal, including his own daughters. But, did he really love them? Can they really take on their own father?

Complete with witches, succubi, werewolves, faeries and vampires, Guardian has a thrilling, fast-paced story line with plenty of action, especially as the story moves towards the end. A brilliant read for this Halloween. But, I would advise to read Lotus (Daughter of Darkness): Lotus’s Journey Part I and Watcher: Lotus’s Journey Part II before finishing with Guardian.

A copy of Guardian, Lotus’s Journey Part III was provided by the author in return for a fair and honest review.