You may remember our reviews of Alisa Woods True Alpha and Dark Alpha short story series from earlier in the year. Now she has returned with a full length novel New Adult paranormal romance shifter series, River Wolves Pack, with the first being released this week, Jaxson. 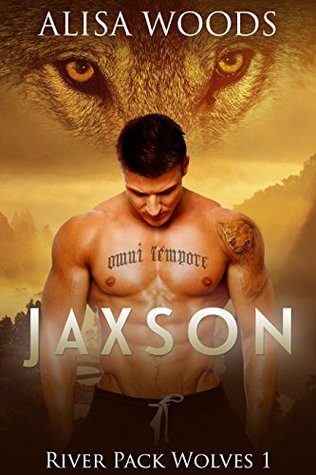 Blurb: Three brothers. Three Secrets. One hope to save the shifters of Seattle.
Former SEAL Jaxson River would give his life for his brothers and his pack, but if he doesn’t claim a mate soon, he’ll be forced to step down as their alpha. There’s only one problem: Jaxson’s dark secret would kill any mate he claimed. With someone kidnapping shifters off the street—and only Jaxson and his brothers, Jace and Jared, to stop them—now is not the time for his secret to come out.

Curvy Olivia Lilyfield is a half-witch orphan with a dark secret of her own. She wants to atone for it by doing good in the world, so when she finds a wolf being tortured in an alley, she doesn’t hesitate to help… even though wolves and witches mix like matches and TNT.

Olivia’s dangerous magic means she can’t let anyone get too close—but Jaxson can’t keep his hands off her, and his kisses are more than she can resist. As they race to save the disappearing shifters of Seattle, the true danger lies in loving each other. They’re playing with magical fire… and their secrets could end up destroying them both.

Jaxson is a complete novel with HEA, the first in the River Pack Wolves trilogy (Jace and Jared coming soon).

Contains scorching shifter sex, alpha military heroes, and sexy witches. Only readers over 18 should dive into the deliciously hot world of the River brothers.

I couldn’t wait to get my paws on Alisha Woods‘s latest NA paranormal romance release, Jaxson. After reading the authors other works in this genre, True Alpha and Dark Alpha short story series, and loving every minute of them, I knew I would jump straight into the River Pack Wolves with excitement.

Jaxson is a full length novel told from both Jaxson and Olivia’s point of view. I probably love novels written in this manner best of all as this allows the reader to empathise with more than one character, which can explain their behaviour and actions. The story really flows at a good pace and has a great mix of romance, magic and action.

Jaxson is leading the River pack, trying to find out just who is kidnapping shifters off the street. Many shifters do not return, while some others have come back, but they are not the same as they were when they went in. It’s as if some of their inner magic has been taken. It is up to Jaxson and his brothers, Jared and Jace to ensure the safety of shifters before there aren’t many left to take. For this, the River pack need a good, strong leader. To become stronger still, it would be advantageous for Jaxson to be mated. The magic bond that is created between a shifter and his female mate is like no other. And, it would fare well if they had little ones as they too would be strong and healthy, being born into mated, bonded parents.

However, Jaxson has a secret, but now is not the time to tell his pack. They need him. At least to see out the attack on shifters. But, the truth is that he can’t mate. He was cursed by a witch, meaning anytime he went to take a mate, one bite would kill them!

Olivia Lilyfield is not having a great time. After walking out of her job, not wanting to adhere to her boss, and wanting to get into the thick of things with her reporting, she is left jobless and in debt. After meeting Jaxson in a sticky situation, she finds herself drawn to him. It isn’t too long before he realises her situation, and, being equally attracted to her in both his human side and inner wolf, he reaches out and offers her a steady job with good pay. How could she say no? Here is this HOT shifter offering her what she needs.

It is quite clear to the reader just how intensely attracted they are to each other. And the physical closeness that Jaxson has to Olivia at times really do turn the heat up. The passion is practically burning, it is so hot. However, after becoming so close to Jaxson, and unaware of his secret curse, Olivia realises that she couldn’t possibly be his mate – he needs to mate with a female shifter, to be an even stronger alpha and lead his pack.

They become so close that Jaxson confides in her. He also airs his concern of the missing shifters and that he needs to remain alpha at least while they deal with this problem. Working together, Olivia has a plan which will help Jaxson keep his secret a little longer, keeping his family from pressurising him, help build stronger allies with other local shifter packs and allow him the time to deal with the current disturbances, which Jaxson strongly feels are set up by the government and allowing the experimenting on the shifters.

These characters are certainly in love, and very passionate. But, to Olivia, it still couldn’t work out between them, especially now. For she also has something that she hasn’t told him; she is half-witch. On finding this out, surely he would go crazy, for it was a witch who had cursed him. Even if her were to listen, wolves and witches do not mix well together. She doesn’t practice magic, but would he believe her? And, after having an ‘accident’ with her magic years ago, could she even trust herself to be with him? Surely she was dangerous?

Readers will be treated to a story where love, romance, heat, action and magic all come together in Jaxson. You’ll be gripped from the beginning, rooting for a HEA, and constantly questioning how each of them are going to overcome their problems, their fears, and their love.

A copy of Jaxson was provided by the author in return for a fair and honest review.

Jaxson (River Pack Wolves #1) by Alisa Woods is now available at Amazon US and Amazon UK.