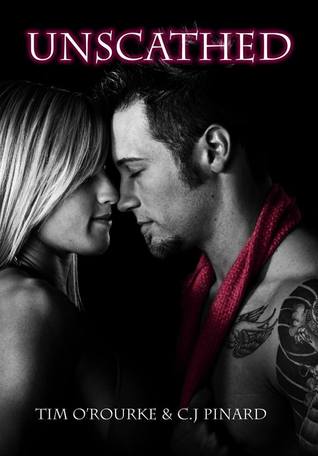 I just absolutely had to be a little naughty and squeeze Unscathed into my schedule to read and review, after it has been written by two fantastic authors, Tim O’Rourke and C.J. Pinard (my personal favourites at the moment). I was also curious to find out what ‘deadly twist’ Unscathed had in store for its readers in this seemingly contemporary romance. After being wowed so often by Tim and C.J. on their solo ventures I expected a similar reaction to Unscathed, and I was not disappointed. Unscathed exceeded my expectation tremendously and was a different type of ‘wow’ as the authors interweave a unique story of romance with a paranormal edge. Unscathed comes complete with two amazing main characters in Mina and Jax who have their own demons to tackle and some pretty hot sensual scenes that certainly turn the heat levels up!!!

English-born Mina Porter is sent to Florida, USA, to live with her uncle after an incident in London upsets her mother. Unfortunately for Mina her secret is difficult to escape from and when she meets Jax McElvoy, a tattooed bad boy mechanic, she feels compelled to follow him. It isn’t too long before Jax begins to take an interest in Mina and romance begins to blossom. That is until Mina’s strange behaviour makes him question her motives and he becomes determined to discover Mina’s secret. Once revealed, Jax wishes he hadn’t found out as it shockingly affects him personally in an unimaginable way. Is Mina crazy? Or does she hold answers that he needs to seek? Either way, how will he now deal with his feelings towards Mina and her secret?

What began as a contemporary romance, and what I initially felt was right for the Young Adult alone, began to turn into something a whole lot more with hints of the paranormal and a darker, denser plot as the story moved on, encapturing the mind for all adults. Due to the momentum of the story, the strong characters, style of writing and of course the curiosity and need to have to find all the answers I found Unscathed to be a quick read and had it read within a day.

Unscathed is told from Jax and Mina’s point of view, making it easy for the reader to connect to both characters as we are made aware of both of their histories. Mina is a girl that didn’t intend to cause any of the trouble that she found herself in. And yet in many ways it couldn’t be helped. Having to start a new life at her young age and to leave her mother and friends behind must have been an ordeal in itself as she has had to settle down and make new friends in Florida. This alone makes Mina a very strong character. She doesn’t seem too daunted by her new life in the US and even with her secret shadowing her she appears confident and sociable.

Jax, I LOVED Jax!!! Although much younger I personally couldn’t help but picture the character ‘Jax’ from FX’s ‘Sons of Anarchy’ series. Whilst the two characters’ appearance are different there were some similarities in their name, image of being a little rough/tough with tattoos and them both working at a garage. This made it so easy for me to instantaneously click with the character and want to fight his cause from the very beginning. Actually, ‘can I be Mina?’ I hear myself ask! Jax is HOT!

Jax and Mina’s chemistry is ELECTRIC! The physical scenes are written very sensually. It kept the momentum and the passion/intensity flowing. There is also a sense of realism when some of these moments don’t always end up rosey. The story can change very quickly from love being in the air to confusion and awkwardness between the characters due to the tension that is created from Mina’s behaviour and the revealing of her past and how it is possibly connected to Jax. The reader is left feeling sympathy for both characters.

Both characters had a type of common ground and both, over the course of the story, were willing to change or at least try to listen. Unscathed is quite tragic in many ways. This is a story that not only tells of the romance between two young adults but also of how their young, innocent lives have been affected by their elders, which in turn has forcd them to face truths that no young person should have to face. Due to their separate ordeals they are actually more mature than their peers but still feel the need to try and fit in.

Even after reading Unscathed I was still excited about the characters, the chemistry between them and the emotional ride that the reader goes on with them. I simply couldn’t stop thinking about this book. It is difficult to believe at the end of the novel that these two young individuals have only been together a short time as they have been through so much together.

Unscathed was received gratefully for the purpose of a fair and honest review.

If you would like to purchase a copy of Unscathed it can be found on Amazon UK for £1.91 and Amazon US for $3.04. (Prices correct at the time of posting.)