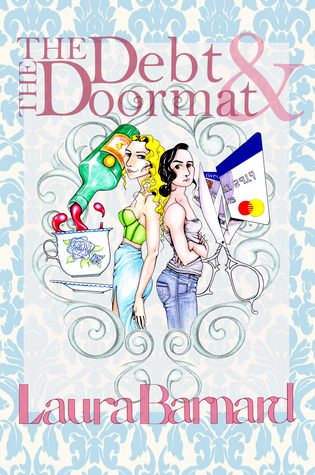 If you are looking for an amusing adult chick-lit with plenty of comedy, romance and a little drama then look no further than this incredible story by Laura Barnard, ‘The Debt and the Doormat’. This FREE fun chick-lit has the British humour like that of Helen Fielding’s ‘Bridget Jones’ and Miranda Hart’s tv sitcom, self-titled ‘Miranda’. The comedy is silly, dry, sarcastic and some great slapstick clumsiness. The humour is strong throughout but brilliantly written around the main plot of a hopeful romance that brings its own drama to the fore. Tuck in girls – grab a glass of wine and/or a box of chocs for this delight of a story!

After living alone for a year after a break-up with her boyfriend life is about to change for Poppy. She discovers that her sociable, party-animal best friend, Jazz, is in debt and whilst having a few drinks together, they get absolutely sloshed, share a few antics and agree to swap lives for a while! Poppy is to move into Jazz’s house, shared with three roomates and live a party-style life, making friends and overcoming her life of possible reclusiveness since her relationship to Stuart ended. Meanwhile, Jazz is to remain at Poppy’s flat, keeping a low profile and saving some cash to pay off her debt!

This is a fantastic beginning for a story. The reader initially follows the main plot, is curious how the change in lifestyles will affect both women and is kept smiling from the sheer craziness of these two gals and their idea. There is something here for every woman as we connect to these characters, some of us are Poppy’s while others are more like Jazz. These two characters are so easy to relate to – we either know somebody like them or we are them!

Once Poppy settles in her new home the reader meets the housemates, Izzy, Ryan and Grace. Izzy doesn’t seem too different to Jazz. She is quite open, sociable and bubbly, if not a little too energetic and heavily into her exercise regime! Grace is the perfect model-type with great looks and a super body. However, Grace’s attitude lets her down as she can also be perceived as a super bitch (not a word I like to use, however the best word to describe Grace’s character)! And last but not least there is………

……… Ryan – oh yes, Ryan! Initially perceived as a slightly scruffy layabout he does have an air of gorgeousness about him and although he appears somewhat moody and grumpy he does go out of his way a fair bit to cover for Poppy’s awkwardness and mistakes. Poppy and Ryan appear to be the complete opposites to each other, with Ryan’s sophistication and coolness at times making Poppy feel like a fool. But, there are some slight sparks amid all the craziness and this gives the reader hope that these two will be together. One minute your heart is beating so fast with intensity as they grow a little closer and the next your heart hits the floor every time a new problem gets in the way! Laura Barnard doesn’t make this an easy straight forward read as there are many ups and downs that these two strong characters have, making it impossible for the reader to guess the outcome.

As well as the main plot there are other sub plots taking place with Poppy having troubles at work with the creepy bosses son, a colleague having trouble with her husband’s affair, her mother adding pressure to Poppy’s personal life and preparing for her brother’s wedding. Even more trouble comes Poppy’s way when her ex, Stuart, re-enters her life. There truly isn’t a quiet moment with The Debt and the Doormat and I loved every little bit of it. Every now and then throughout reading a book I like to check how far I have read and I was very pleased to see that I was only half way through the book as I didn’t want it to end.

The Debt and the Doormat is proper girly fun. Funnier than Bridget Jones, The Debt and the Doormat is possibly the funniest book I have ever read. It does have its more serious moments, especially in the latter half of the book when the characters Poppy and Ryan seem to be developing some feelings for each other, which really helps balance the story out. It is certainly well worth a read. I personally would love to read the story again and would like to hear more from Poppy and Ryan. We have been informed that a sequel is due in March/April 2014 which is brilliant news!

At the time of posting this book (in Kindle edition) is FREE at Amazon UK, Amazon US and (in many formats) at Smashwords! Don’t miss out!!!

The Debt and the Doormat was received gratefully from Laura Barnard for the purpose of an honest and fair review.

Laura would love you to check out her Facebook page at www.facebook.com/laurabarnardbooks and while you’re visiting please give her a ‘like’!