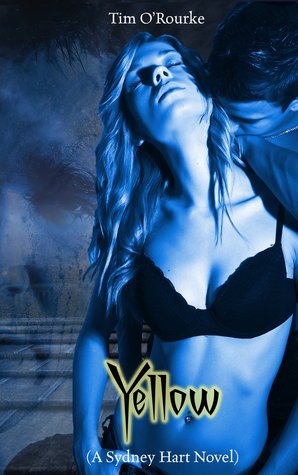 Blurb: In love with Vincent and trying to move on with her life, Sydney Hart is visited by an old friend. When this friend suddenly goes missing, Sydney finds herself in a desperate race against time, not only to save her friend’s life, but also her relationship with Vincent.

With Michael wanting to spend more time with her in order to rekindle their relationship, Sydney’s life and emotions become ever more complex.

Trying to stay focused on the hunt for her missing friend, Sydney has to figure out who is telling her the truth; but most importantly, who is Mr. Yellow?

Another masterpiece from Tim O’Rourke! There is nothing that this author can do wrong! Yellow covers many genres, including thriller, paranormal, horror, mystery and romance! Not to mention some cheeky dialogue in-between to lighten the tension and keep the reader amused. Add to this some great characters, nightmare ‘flashbacks’ and some great drama.

Each series of Tim O’Rourke’s covers many genres, however each is different and original, and Sydney Hart is no exception. I love the supernatural element of this series and how it affects Sydney, but rather than have me spoiling it I like the idea of keeping it a mystery and leaving you a little curious!

With Sydney now on leave she is spending all of her time with Vincent, but there is always that question deep down of ‘where can she go from here?’ The story opens up to a tender, loving scene between Sydney and Vincent. It is beautifully written, sensual and therefore, a little mature for the younger reader (I’d recommend 17yrs+). However, it is still very sweet and draws the reader in instantaneously. And after a small reminder of what had happened previously in ‘Witch’ (Book 1) we return to where Sydney is at, in her little ‘bubble‘.

“So instead of facing the world…….. I hid beneath the sheets of my bed, locked tightly in Vincent’s arms…………. we lay in each other’s arms, listening to soft music filtering in from the living room, and making love.”

As the story unfolds, the reader is acquainted with Lisa, Sydney’s best friend. Lisa’s visit is interesting, a little unwelcome at first. But Lisa is curious as to what Sydney is up to, at the same time as caring and wanting to encourage her to move on. Lisa is also a funny character and I caught myself laughing at some of the dialogue between her and Sydney.

It is at this point that the reader is made aware of Mr. Yellow and his mysteriousness, which is just what Lisa found so intriguing about him. Who is he? What’s his background? Will he be the one? However, (later in the story) Lisa appears to have gone missing but will Sydney be able to piece together what has happened? Remembering Lisa’s last visit to her home and connecting it to her ‘flashback’ nightmares when dreaming, Sydney decides to do a little investigating!

Some of the scenes, in particular the nightmare sequences can be quite horrific, scary and violent/gory. Sydney sees some horrific and violent events unfold in a household but can she make sense of them? There is also a sense of eeriness that the reader will feel at parts, in particular when Sydney visits Lisa’s house and sees a dark figure inside! This scene really did make me shudder!!!

As well as dealing with her feelings from Book 1, Vincent, trying to solve the puzzle of Lisa’s disappearance, her nightmares and the mysterious Mr. Yellow, Sydney also has to tackle her feelings towards Michael. After a quick fling with him in Book 1 he has developed feelings towards her, but she in in love with Vincent. Due to Vincent’s circumstances, Sydney is aware that a long term relationship could be unlikely but can she betray Vincent to ensure a relationship with Michael?

Even the reader is torn at this point as both Michael and Vincent are fantastic characters, and both have deep feelings for Sydney. They are great guys – I think it’s a pity she can’t have both. Albeit, some may disagree! The reader cannot help but wonder ‘what will become of Michael?’ if he doesn’t end up with Sydney. (You can feel a little sorry for Michael.) At the same time is staying with Vincent a realistic option?

Although it has been over 12 months since reading the first book of the series, I found Tim O’Rourke easily manages to remind the reader the main points of book 1, mostly through dialogue and Sydney’s thoughts throughout the book. However, they are camouflaged well into the story of Book 2 enabling a fresh reader to the series to pick up Yellow and understand what is happening and what has already taken place.

There are so many twists and turns, great characters and constant on-going adventure from beginning to end. You can liken it very much to your favourite roller-coaster and once you start, you just don’t want to get off. Any reader, of either gender over 17, who loves such a mix of genres to read will have it all in any one of Tim’s books. If you haven’t already, you MUST pick up a Tim O’Rourke book. You will not be disappointed!!!!

Yellow (A Sydney Hart novel #2) was provided by the author, Tim O’Rourke, for the purpose of an honest and fair review.

You can purchase Yellow from Amazon UK and Amazon US as e-book and/or paperback.

You can also purchase Witch (Sydney Hart #1) at Amazon UK and Amazon US!