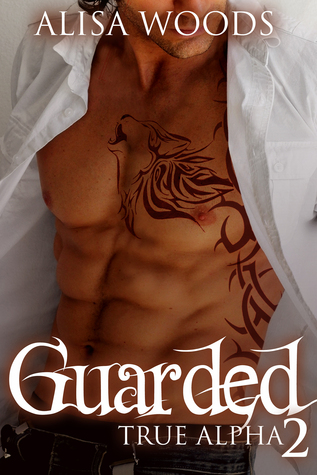 THIS IS THE SECOND EPISODE OF SIX in the True Alpha serial.

As Lucas fights his instinctual attraction to Mia, focusing instead on guarding her and keeping her safe from the Red pack, Mia tries to discover the truth about Lucas’s dead mate.

Whereas book one was a very intense and hot read, Guarded (True Alpha #2) focuses on the emotional tension between Mia and Lucas. After a passionate night with Lucas, Mia’s inner wolf knows that he is right for her and that she belongs with him but Lucas is still in a great deal of heartache and pain from the death of his mate. The reader remains gripped to these characters and will question whether Mia will ever be able to help him come to terms with his deceased mate and allow her to belong with him.

Lucas battles his feelings for Mia, knowing that he can’t go there again. He can never be as close to anyone as he was with his mate. And, as much as he will protect and guard Mia from the Red Pack, he will not take her again or even come close. Guarded actually breaks down these two great characters where the reader will see Lucas’ more darker, serious side, his sorrow and pain, as well as his desire to keep Mia from this.

As a result he puts his defences up and distances himself. This makes him a little cold and impersonal with her at times, although it is also clear that he doesn’t want her to think bad of him. This in turn makes it more difficult for Mia to be with him and know how to respond. Book 2 certainly holds more emotional tension as opposed to sexual tension.

The reader can certainly empathise with both characters, making it unpredictable on the outcome of these two. There are twists and turns, a strong attraction, and danger from the Red Pack, as they will do anything to keep business going their way. (The Red Pack own a rival company to that of Lucas’, and threatening Mia may seem like a good idea to them – especially as they sense the connection between Mia and Lucas and his need to protect her.)

Mia’s character is strong as she feels that if she can help Lucas to open up and face what happened then she is in with a chance. She has much to understand about packs, mates as she has never been raised by one. At times this can make her seem a little naïve to Lucas. This makes the reader just long for Lucas to take Mia under his wing and teach her all he knows, guard her, protect her and love her! But will it all be too much for Lucas to bear?

Lucas’ dad has a strong impact on Mia as he is accepting, gentle and protective – all the things that a father should be that she has missed out on not having her own around. This scene was relatively small and yet had such a deep meaning, especially for Mia. I would like to read a little more about these two in the subsequent books.

The reader doesn’t miss a thing as Guarded (True Alpha #2) picks up where we left off in Desired (True Alpha #1). There are reminders of what happened previously, allowing the reader to easily remember and continue the story without having to keep checking back to the last episode. I cannot wait for the third instalment, Hunted. This series is a strong one for many a paranormal fan to follow. You will not be disappointed with the power and depth that these short stories provide!

Guarded (True Alpha #2) was provided by the author in return for an honest and fair review.

Guarded (True Alpha #2) is available at Amazon UK and Amazon US.

You can also check out our review of Desired (True Alpha #1) (short story) by Alisa Woods here.