A little later than I expected to read it, but I have been very excited to read Sheila Norton’s ‘Yesterday’. As soon as I read the synopsis with the 1960’s era ,and the Mods and Rockers mentioned, I had to add it to my reading list! Being born two decades later, I obviously cannot recall the times myself. But, I always loved family members’ stories of the times, watched documentaries, loved the music and, as a fan of the indie band Blur in the 1990’s, I used to hang on every word frontman Damon Albarn said. And so, as soon as I found out his favourite movie of the time was Quadrophenia, I simply had to watch it. Over the years I have watched it many times, even when it was re-released on cinema. I had the poster on my bedroom wall and listened to The Who’s soundtrack of the movie over and over. And so, Yesterday has opened up that side of me once more and I have to say that the read is fantastic! – Caroline 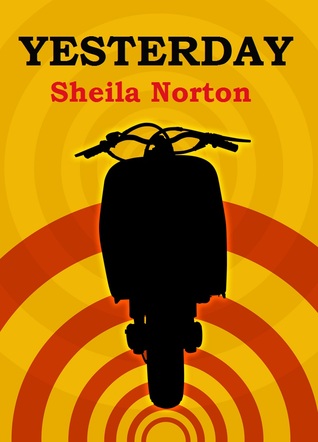 Blurb: During the riots between the Mods and Rockers in the early Sixties, teenager Cathy finds herself in the wrong place at the wrong time, and the events which follow will haunt her for the rest of her life. Forty years later she’s forced to revisit her past, deal with her unhappy memories and try to find out exactly what did happen back in 1964.

It is almost 51 years ago since the mayhem and chaos at the seaside resorts of Clacton and Brighton involving the Mods and Rockers, and yet Yesterday keeps the whole era alive with the music, fashions, dialogue, and day-to-day life. Focusing on the life of fourteen year old Cathy, Yesterday delves into her involvement with the Mods and Rockers, her friends and bullies at school, pressure from her mum to get good grades, trouble with her mum’s new male friend, and a violent stabbing that involves someone she knew!

We begin the story in 2004 where Cathy, a journalist and now in her mid-fifties, is given the chance to write a story on the era she knows a great deal about – the Mods and Rockers of the 1960’s. Little does her editor know that she may be able to fill in the blanks of a crime story that would be full of interest in the public eye, as well as opening up some wounds of the past and releasing some ghosts of her own! Yes, this story is certainly personal, just as it is informative.

The reader is then taken back to March, 1963, where Cathy meets Janice Baker. Janice Baker is two years older than Cathy. She is both cool and pretty. Being sixteen and having parents that do not trouble her too much, Janice can almost do what she wants. She wears the fashions, including make-up, and has magazines featuring many bands including The Beatles, which Cathy absolutely loves to look at – especially if Paul McCartney is pictured with those beautiful puppy dog eyes of his! Cathy’s fascination is so exciting to read about, and after travelling home from school regularly on the bus at the same time as Janice they begin to chat about the culture of the day, embarking on a close friendship.

Each chapter is set in a different month from thereon, leading up to the beach fights and afterwards, as we follow the story of a terrible ordeal that Cathy has at Clacton, a stabbing later in Brighton, as well as some home troubles for poor Cathy. We watch her friendship grow with Janice, her romance blossom with her brother’s friend, Jimmy, and her relationship with her mum take a downward spiral when she finds out what her mum has been quiet about for some time.

The mystery of the story is surrounding the stabbing at Brighton. Janice’s Mod ex-boyfriend, Ian, is the victim but the culprit is yet to be determined. After the violence and Cathy’s ordeal from the first beach fight in Clacton, Cathy believed all of her friends and her brother had stayed away this time. However, Cathy has a bad feeling about this, especially since it was Ian that brought on her ordeal in Clacton! Could it simply be his stabbing was a result of yet another fight between many Mods and Rockers who just lost it with each other and things got out of hand? Or was it that somebody intentionally stabbed him? Could it have been someone she knew? And, could it have been anything to do with her ordeal?

After her ordeal in Clacton, she ran to meet with her Rocker brother, Derek. However, when he wasn’t at the café he said he would be at, Cathy stayed there waiting for him to show. She was trying to cope with the teasing and taunts from the Rockers (as she was dressed as a Mod!), when a lad with Paul McCartney’s soft, brown eyes defended her, and offered to walk her to the station so she could get home safely. This is Jimmy. Lovely, sweet Jimmy, and a Rocker friend of her brother’s. And this is the beginning of an attraction between them. She becomes closer to Jimmy as he turns up ‘looking for Derek’ a few times at her home, and they begin to see each other over time.

But, he is her secret. As Janice would say, there’s no way you can go out with a greasy Rocker. She can’t be seen in public with him, or even tell Janice about him. She would be outcast and taunted forever if her friends knew. Cathy begins to realise that Mods and Rockers do not mix – you are either one or the other (in the eyes of her friends). But, she finds this ridiculous, as does Jimmy and her brother. But, she soon learns the hard way, and risks losing everything – Janice and Jimmy! Will their friendship, and love, survive? What can Cathy do to keep it all running smoothly?

The characters of Yesterday are all brilliant and realistic. One of my favourite characters of the story is Cathy’s brother, Derek, a Rocker. He is a caring older brother, looking out for her when he can, buying her the occasional record (even if it is a Mod one!) that she’d never be able to afford with her little pocket money, and even letting her play it on his record player when he was out. This shows the sort of relationship they had – they were very close and didn’t really care deep down whether you were a Mod or a Rocker.

And then there is Cathy’s other school friend, Linda. Linda was always seen as ‘square’ and didn’t really fit in either category. She was happy doing her own thing, being an individual. And, besides, she was too busy looking after her ill mother. But when Cathy began her friendship with Janice, Cathy began to leave Linda behind, only to realise later that Linda was very mature and didn’t get wrapped up with whose side to be on, what group to belong to, etc.

Yesterday is well-researched and has a fantastic feel of the era with perfect, realistic characters to draw the reader in. It is written so well it is easy to visualise the story with many references to the times, with social and financial aspects in particular. There is great dialogue between the characters with a real British 1960’s charm. Pop culture and fashions are mentioned but are not overdone, allowing the reader to really enjoy the fantastic narrative running through the book!

A copy of Yesterday was provided by the author in return for an honest and fair review.

Yesterday is available at Amazon UK and Amazon US.