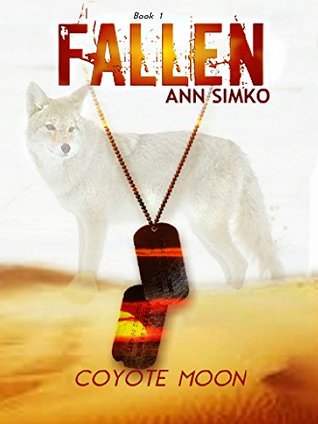 Blurb: Dr. Dakota Thomas isn’t prepared for the gunshot victim who rolls through his emergency room doors. Michael Ricco looks like a young Marine in a world of trouble, his dog tags, however tell a different story.
How could the military have no record of him? Why was he shot in the back in the middle of the desert, and why were thirteen people murdered to keep his secret? More than that, how could he have a birth date of 1898?
In a world where genetic experimentation pushes the boundaries of what someone would do to live a little longer, the question may be, how many will die in order to keep one person alive?

Fallen is an extremely gripping, fast-paced action thriller, written well and with passion – it is an exciting read that will keep your adrenalin flowing throughout. We first meet Ricco, shot and injured in the desert, where it is unclear exactly what has happened to him. This is a super beginning as the reader is drawn into this guy’s ordeal and immediately asks questions that we need to find the answers to. Who is shooting at him? What has he done to deserve this? Will he survive? And to add more mystery, we are then told about his dog tags reading 1898 as his birth year!

When in ER, as Ricco is attended to by Dr. Dakota Thomas, Dakota tries to work out the mystery surrounding him – just who is Michael Ricco? After bringing in the local Sheriff and him having contact the military, who have no record of him, and the local Deputy going missing in the same place Ricco was found, it is then that Dakota reaches out to his private investigator brother, Montana, to do some digging. Reluctant at first, it isn’t too long before Montana changes his mind.

As another is attempt is made on Ricco’s life whilst in hospital, Montana, a former Army Ranger, makes arrangements for Ricco to be escorted to a safehouse. And, with Ricco still needing medical care, and Dakota wanting answers on who he is, Dakota accompanies them. Matters soon turn even more serious as we learn that Ricco was kept in bunkers underground against his will and has been experimented on for years, used as a lab rat, and seen many others die for this cause. It is clear to Montana that the people Ricco has escaped from will want him dead for fear of him revealing their secrets.

The Governor is the villain of the piece. He is in charge of the lab testing and experiments, believing that the death of a few could save millions in the future. Seeing nothing wrong with what he is doing and being brutally violent, it has a little Nazi-esque feel to it.

“… I’m a  fucking hero to every cancer patient who prays that a cure will be found before they die, to every twenty-year-old victim of arthritis, to every human being who might die of Avian Influenza… I am God, Dakota Thomas, minus the moral fiber.”

With military working as his staff, he has the support and help he needs to carry out his testing, help defend his fort and prevent anyone from escaping. The only exception to the rule thus far has been Ricco’s escape. He will go to all lengths necessary to retrieve Ricco, as he has proven to be an interesting case, managing to survive so much more than others treated similarly.

The story takes an even more serious turn as Dakota finds himself being taken, and in the hands of The Governor. From the Governor’s point of view, surely Dakota, being a doctor, would welcome such experiments in the name of medical research? Having Dakota helps the Governor to redeem some power: he can now use Dakota to experiment with and possibly offer a trade with Montana – Dakota for Ricco! Will Dakota survive his ordeal? Will Ricco land right back from where he escaped? And just what is Montana’s next move going to be?

“Montana Lee Thomas was not a patient man, nor was he a tolerant one… He had taken lives in the past, but killing was not an easy thing for him… Never had he willfully, wantonly, taken a human life. There had never been the need or the desire.

Fallen is written in such a way that it makes the story very easy to visualise. It would make a great movie with kidnapping, a perfect villain, explosive action, gunfights, brawls and also brotherly love. And, just when you think they’re out of the woods – there is more action to come. You’re never quite sure what will happen next, or who will be hurt. This makes for a fantastic book of surprises – and I LOVE that. Of course, I want the heroes, the Thomas brothers in particular to be safe and live through these events, but I also enjoy an unpredictable, gritty and possible more realistic story. I like the danger, the fear and the intensity, and Ann Simko surely has brought these to the story.

As well as the physical injuries to Dakota, there is also the way in which he is affected mentally by what he is going through. This creates some compassion in him for Ricco as they have been through a very similar experience. Albeit, Ricco’s lasted almost a century and any family he once knew have been long gone. But, as the story moved on I saw Ricco as another brother to Dakota and Montana. They build trust from the very beginning, with Dakota patching him up and Montana showing that he will put his life on the line for him.

I would strongly recommend this read to anyone who loves a fast-moving, easy flowing action adventure/thriller. It will definitely keep you on your toes and it has it’s share of explosive moments. However, there are also some beautiful emotive and touching scenes, especially towards the end. I would certainly like to read more of this series!

A copy of Fallen was provided by the author in return for an honest and fair review.

Fallen (Coyote Moon #1) is available at Amazon US and Amazon UK.

The sequels, Through the Glass (Coyote Moon #2) and The Coyote’s Song (Coyote Moon #3), are available with Broken (Coyote Moon, book 4) being released on March 13th, 2015.

When not writing, Ann Simko works as a nurse. She lives in rural Pennsylvania with her husband who puts up with her over active imagination, two scary teenagers who try to ignore her, three very large dogs, six cats and five extraordinarily large lawn ornaments otherwise known as horses. She has six published novels and is currently contracted for one new book.