Today is the release of the final instalment of the new adult, paranormal romance Dark Alpha series, LOVED. Written by the brilliant Alisa Woods (True Alpha short story series), this is a super climatic ending of such a gripping and lovable series. If you are a fan of shifter paranormals, or even romance in general, this is such a lovely series of one proving their love for someone, helping them to escape their unwanted mate, and ultimately showing a sacrifice of their own life to protect the one that they love… 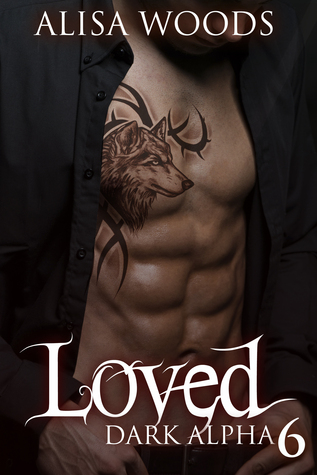 The final installment of Dark Alpha…

Loved (Dark Alpha 6) is 60 pages or 15,000 words. It’s the final of six episodes in the Dark Alpha serial. Dark Alpha is the sequel series to True Alpha, the debut shifters-in-Seattle paranormal romance from Alisa Woods.

Everything comes together in this last instalment of Dark Alpha, but not necessarily how we would all expect… LOVED picks up from where we left off in Penance (book 5), where after rescuing his love Arianna from the grasps of her unwanted alpha, Mace, Jak is now sacrificing himself for Arianna’s complete riddance of Mace from her blood, and for the safety of her and her family’s future. With the help of a witch, Circe, the spell should draw out Mace’s wolf from Arianna’s blood, and join Jak’s – where the two will fight it out until Jak’s body can no longer bare it. Only Arianna doesn’t know Jak’s plan.

Many questions are to be asked during the first few pages; will Circe’s spell work and free Arianna from Mace totally, or will Mace’s magic bond be forever mixed with her own blood forever? Plus, will this experience really kill Jak, or is there a shred of hope?

As Arianna witnesses and realises Jak’s sacrifice she cannot believe it. She can’t bear it – she can’t live now without Jak. But, is it too late to save him? And, even if she could, how could she save him? Arianna is completely overwhelmed with Jak’s love and devotion to her, and even towards her family who he doesn’t know. But, without Jak her escape from Mace is meaningless. He rescued her from Mace to begin with- she needs him to carry on, to give her the love and life she wants to be a part of.

And then, we come back to the question, ‘Is love stronger than magic? Or will breaking an unbreakable bond destroy them both?‘

Not only do we have to worry about Jak’s welfare here, there is also the threat of Mace finding them, and what he’ll do to them when he does. It was only a matter of time before Mace caught up with them. The circumstances were a little surprising and unexpected, but make for a more fearsome scene that is certainly unpredictable, but thoroughly enjoyable.

Throughout this series, I absolutely loved reading a little about Gage, Mace’s brother and Jak’s alpha. He is aware of Mace’s vicious and dark side, but Mace is his brother. At the same time, he saved Jak from a bad life himself, and brought him up like a son. This would be a fascinating character to explore more, and I would love it if Gage showed up in any future work of Alisa’s.

I can’t wait to see what Alisa Woods has in store for her fans next. Her writing is exciting, emotional, suspenseful and dark. You can catch up with both True Alpha and Dark Alpha now available in individual boxed sets, or as individual short stories. These 5* series are not to be missed!

A copy of Loved was provided by the author in return for a fair and honest review.

Loved (Dark Alpha #6) is available at Amazon US and Amazon UK.