After having a clean break from the wrapped-up True Blood tv series, as well as the book series, almost two years on from the release of the book I finally found a moment to read the final Sookie Stackhouse story: Dead Ever After. Read as a one-off book, I found it to be refreshing, with plenty going on in the paranormal world and magic that surrounds Sookie Stackhouse. It’s certainly sad to see the end of the journey we have all shared with Sookie! 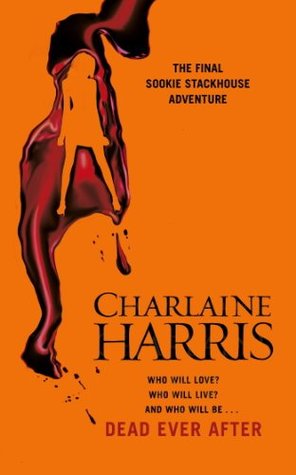 Title: Dead Ever After: A True Blood Novel (Sookie Stackhouse #13)

Blurb: Sookie Stackhouse has one last adventure in store.

Life has taken her from a waitress in Merlotte’s Bar, Bon Temps, to part owner; from social outcast to the heart of her community; from a vampire’s girlfriend to the wife of one of the most powerful vampires in the state.

She has survived explosions, revolutions and attempts on her life. Sookie has endured betrayal, heartbreak and grief… and she has emerged a little stronger, and little wiser, every time.

But with life comes new trials…

The question is, in the end: who will love, who will live, and who will be dead ever after?

There are secrets in the town of Bon Temps, ones that threaten those closest to Sookie—and could destroy her heart…

Sookie Stackhouse finds it easy to turn down the request of former barmaid Arlene when she wants her job back at Merlotte’s. After all, Arlene tried to have Sookie killed. But her relationship with Eric Northman is not so clearcut. He and his vampires are keeping their distance…and a cold silence. And when Sookie learns the reason why, she is devastated.

Then a shocking murder rocks Bon Temps, and Sookie is arrested for the crime.

But the evidence against Sookie is weak, and she makes bail. Investigating the killing, she’ll learn that what passes for truth in Bon Temps is only a convenient lie. What passes for justice is more spilled blood. And what passes for love is never enough…

Almost two years has passed since the release of Dead Ever After, but after not being completely bowled over by Deadlocked (Sookie Stackhouse #12), I was reluctant to read it. However, I couldn’t read a whole series and then miss out the last book! And, I have to say I was pleasantly surprised with this final story! Amazingly, I have also been able to avoid reading any other reviews of the book and so have read Dead Ever After with a fresh approach.

Throughout the story Sookie has many worries. To begin with, after raising Sam from the dead, using her magic from the cluviel dor (which could only be used once), she noticed a clear coldness from Eric. Is he annoyed with her for using her magic on Sam and not saving it for him? Well, that’s just tough luck for Eric as there was no way she’d let Sam die! Not only has she to worry about Eric, but Sam seems to have changed after his experience too.

Sam seems really quiet and a little off with her, or maybe he is shaken up from the whole coming-back-to-life episode. Sam has been through a lot and, when Sookie sees Sam next, he has forgotten a great deal. Sookie then reminds him of everything, even the events he probably doesn’t want to remember, as she knows it’s in his best interests for him to face up to them. This is also a great way for Charlaine Harris to recap the last story, and provides the reader with enough detail to understand what has happened, but doesn’t bore the regular reader of the series either.

As the story moves forward Sookie is in for some more surprises. First, Arlene, an ex-friend and colleague, has been released from prison and approaches Sookie at Merlotte’s bar asking for her old job back. Now a part-owner of Merlotte’s, Sookie clearly stands her ground and refuses. She can’t believe the nerve of her after Arlene had tried to have her killed. Shortly after, Arlene’s body is found in the dumpster behind Merlotte’s, and you can just imagine who will be accused. Yes, poor Sookie!

And then, there’s Eric. After everything that has happened, Eric has almost abandoned Sookie for reasons that Sookie and the readers are not sure of. It appears to us that he may be a little irked after the incident with Sam. And yet, there is more going on in the vamp world that he needs to attend to and this will have a definite impact on Sookie. The ever-practical Eric has to do not just what is in his best interests, but also what is expected of him.

Will Sookie be cleared of a murder she didn’t commit? Will her and Sam be able to return to a their comfortable friendship? And, will Eric deal with his vamp problem and return to Sookie? Or, will Sookie rekindle her love with her first love, Bill? This final instalment certainly has many questions to answer. And the reader will find out the answers to all as it all wraps up.

Although fairly well written, with plenty more going on, I found it didn’t grip me with intensity. However, the storyline itself was good. Sookie’s love interests were not present too much in the book and I know many won’t be too happy with the ending. But, I was fairly happy. As long as Sookie ended up with either Bill, Eric or Sam I was going to be happy as I have come to appreciate all three characters over the course of the book series, as well as tv series.

It is very difficult to read this after seeing the tv series, though, as it is hard to differentiate between the, sometimes very different, storylines but with the same characters. In hindsight, I do wish I had read all of the books first, before watching the tv series. That said, I do like how the book series has gone in terms of keeping more with the telepaths and witches. This certainly adds to the magic of the story, as well as remind us that our focus is Sookie, even though we can all get carried away with the strong male characters.

All-in-all, the book series is a great read, and I would encourage anyone, whether read the series before or not, to start at the beginning and read each book in order to remind ourselves of Sookie’s journey, and what Charlaine Harris wanted us to get from the series.

Dead Ever After (Sookie Stackhouse #13) by Charlaine Harris is available at Amazon UK and Amazon US.