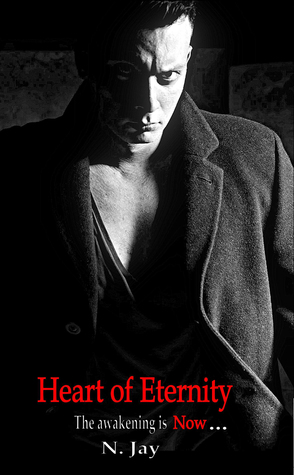 Blurb: When you are invited to dance with the muse of love, when you are driven to the edge by the pain of the past, when you hold the remedy for what ails you in your arms you will find yourself in the heart of eternity.

Set in the Blue Mountain’s town of Blackheath in New South Wales, Australia, the novel Heart of Eternity introduces two very different characters, Jay and Naida, who encounter each other at a challenging time in each of their lives. Their individual expressions of the feelings they provoke in each other give rise to a turmoil that could ultimately claim their lives. When two people understand so deeply the pain each other has faced will it force them into the abyss of darkness or will their combined need for healing allow love to enter both their hearts?

Heart of Eternity is a profound and interesting fantasy story, exploring the demons and inner light within two main characters in Jay and Naida. The narrative is beautifully written with the use of powerful and descriptive language. There is dark and there is light. But when they meet, will they really be whole? That is the key question and mystery of this short story.

From early on in the story the reader discovers the first of Naida’s conflicts. Being a sufferer of cancer she longs to exorcise her mind and spirit, instead of using more conventional methods, to make it easier and give herself more time. It’s almost like she feels that faith, hope and a positive mind will play an important role in her well-being. However, the conflict lies when her own father, an atheist, has long lost his faith and longs for her to seek out the medical and practical methods at hospital.

Meanwhile, Jay on the other hand behaves like one of the lads, encouraging dares, drinking, racing, being leary and flirting with many. He is a typical bad boy, with the good looks and the carefree attitude with nerve and a cheekiness about him. But Jay’s characters also holds an inner demon inside of him after suffering many bad and tragic ordeals. He has reached a point in his life where nothing matters and so he does as he pleases.

The story is told from the perspectives of both Naida and Jay, making the reader aware of both of their circumstances, feelings and their own esteem. I love this as the reader can gain an understanding of their thoughts and actions. Because of this there is a nice build up to the meeting of these two souls, albeit it is mysterious considering Naida’s vision of a shadowy figure, green eyes – without knowing who they belong to.

It’s obvious that they both have this deep connection and as they realise each other’s inner souls the reader longs for them to reveal all and, where possible, use it to help the other. Will Jay face his demon? If so, who will win? And will Naida deal with her cancer in a positive manner?

Naida’s Uncle Zachriel is a great supporting character with the patience and understanding to help Naida, and later Jay. He is the one who helps Naida look further and further into her soul where she finds a darkness within her. Without swaying her decisions either way he guides her and yet allows her to be independent and make her own decisions. He trusts her judgement and reasoning. Zachriel also encourages her to make more progress each time they sit and look within, once Naida had decided that this was the way for her.

Although a beautiful story I felt that the characters could have explored each other more. To really beef the story up it would have benefited from more romantic suspense and a physical love scene in order to allow the reader to really feel the depth of their feelings for each other. This would have made for a more emotive ending.

However, I did feel that as I continued reading the intensity and emotion did build up, crescendo-like (albeit gradually), until the very end. It is also at this point when I realised just how meaningful the title of the book is! Of course I’m not to spoil the story but the latter chapters were amazing to read and I thoroughly enjoyed them. It is great fantasy writing, especially the tension and conflict between Jay and his demon.

I would certainly recommend this read to young adults and over of whom are particularly interested in fantasy, but be prepared for a little paranormal.

A copy of Heart of Eternity was provided by the author, N. Jay, for the purpose of an honest and fair review.

Heart of Eternity by N. Jay can be found at Amazon UK and Amazon US.

One thought on “Heart of Eternity by N. Jay **REVIEW**”