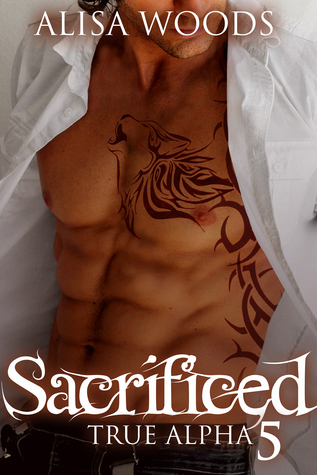 For fans of paranormal, shifters and plenty of action!

Shifters live in the shadows of Seattle, just under the skin of the alpha male, dot-com entrepreneurs who are building a new Silicon Valley in the Emerald City.
Sacrificed (True Alpha 5) – New Adult Paranormal Romance

Even with Jak’s help, Mia finds escaping Mace’s grasp isn’t easy… in fact, it may require a sacrifice neither she nor Lucas want her to make.

Sacrificed is the shortest of the True Alpha series, focusing on the escape of Mia and her friend, Jupiter, from the Red pack. And the story picks up just where we left off in Captured, book 4. It appears that Jak, a shifter and member of the pack that is holding her, is trying to help her and Jupiter escape.

Mia is struggling with her thoughts. There is the question of why Jak would be interested in going against his pack and helping them. But worse still is the strong hold that her submission to Mace has over her, making it almost impossible to go against the wishes of her captor.  In her human self she knows that she doesn’t belong here, with the Red pack, but her wolf has little control now that she has submitted. She must obey his wishes. Mia needs to find the strength to do the right thing, if not for her then for Jupiter.

Meanwhile, Lucas and his father’s pack have their own rescue plan to save Mia. Without spoiling too much, I can sat that there is plenty of action and it doesn’t go as smoothly as one would like. However, it is exciting to read and the fear for both Mia and Lucas’ pack reaches a high.

Mace was not so easy to escape from, and now the reader does not know what Mace will have in store for Mia. Lucas is only too aware of the situation and is helpless, regardless of his growling and snarling inner wolf. He knows that Mace will claim Mia for his own unless they can come up with something…………….. and quickly!

Sacrificed, as well as the previous books of the True Alpha series, create a fantastic build-up of tension and excitement for the final instalment, Claimed. I loved the ending of Sacrificed, especially with a nice surprise that no reader would guess. I am certain that Claimed will be as thrilling, if not moreso, than the first five!

Sacrificed (True Alpha #5) was provided by the author, Alisa Woods, in return for an honest and fair review.

Sacrificed (True Alpha #5) is available on Amazon UK and Amazon US. (Currently individual books 1-6 can all be bought from Amazon for a small price. However, if you would like all books together in one set – this will be released on Tuesday 28th October, again for a small price. Book 6 and the boxset are available to pre-order in the time being.)